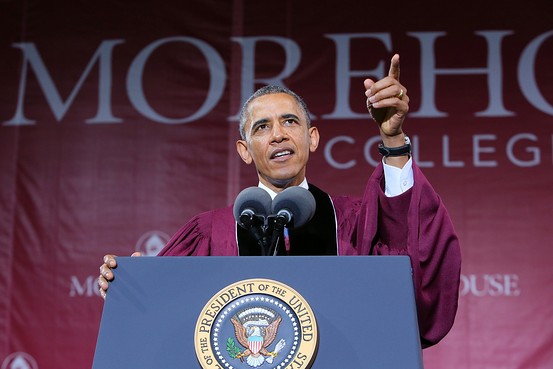 After thanking everyone, he warmed up the crowd with a few jokes.

The ceremony was held outdoors despite inclement weather. Obama remarked that many moms must be upset about their hair getting rained on. He understood perfectly well, because Michelle (Obama) would not be sitting out there in the rain.

Among his many take home points were the importance of social responsibility and family in the black community.

He stated that there has been a legacy of slavery and segregation in America. A present of racism and discrimination still persists. But black people will go nowhere by making excuses.

“Nobody is going to give you anything you have not earned. Nobody cares how tough your upbringing was. Nobody cares if you’ve suffered your discrimination.”

Obama talked of barriers that have tumbled down, which led to opportunities opening for people who are sitting before him in that very audience. Although inequality still operates beneath the surface, people with college degrees have chances that aren’t afforded to many others. These prospects should be used to better the social welfare of everyone and to uplift others.

“It’s up to you to widen your circle of concern, to care about justice for everybody…Inspire those who look up to you to expect more of themselves.”

“Just be a good role model. Set a good example for that young brother coming up.”

Whether they came from a black community or came in search of a black community, (Morehouse is an all-male historically black college), Morehouse men should be honest, good, strong, upright men who are sensitive to injustices and who are willing to accept responsibility for society’s ills.

He advised young undergraduates to stay connected with their communities despite whatever successes may come their way: Don’t just get that nice house and that fancy job and stylish car and never look back.

College graduates have responsibilities not just to themselves but to future generations.

“Those who’ve been left behind who haven’t had the same opportunities as we had, they need to hear from you. You gotta be engaged…Pull them up, expose them. Support their dreams, don’t pull them down.”

To those headed to medical school, Obama said: “Heal folks in underserved communities who need it too.”

For those starting a business:

“Ask yourselves, what broader purpose your business might serve in putting people back to work or transforming a neighborhood. The most successful CEOs I know didn’t start out intent just on making money. Rather, they had a vision of how their product or service would change things and the money followed.”

“No one expects you to take a vow of poverty. But I will say, it betrays a poverty of ambition if all you think about is what goods you can buy instead of what good you can do.”

There is much good to be done in neglected black communities all over the world. Obama mentioned the perils of many heavily African American neighborhoods – communities with few people to guide them, underfunded schools, pervasive violence, and where too many men spend their time on the streets and not in the classroom.

“There are some things as black men we can only do for ourselves. There are some things as Morehouse men that you are obliged to do for those still left behind. As Morehouse men, you wield something even more powerful that the diploma you’re about to collect. And that’s the power of your example…. Use that power for something larger than yourself.”

“Find some time to defend the powerless.”

But these hope and dreams only thrive when the black family unit is in tact.

In highlighting this point, Obama retold the story of one Morehouse undergraduate, Frederick Anderson.

Frederick was initially enrolled at a university in Ohio, only to find out that his high school sweetheart was pregnant in Atlanta. He moved back to be with her and their child and also enrolled at Morehouse. Because of demands of being father and having several jobs to support his family, Frederick ended up leaving Morehouse. In fact, he enrolled again, left, then enrolled a third time before finishing his degree.

Obama admired his persistence and dedication to his family and his education. He said about Frederick: “He is a family, man and a working man and a Morehouse man. Keep setting an example for what it is to be a man.”