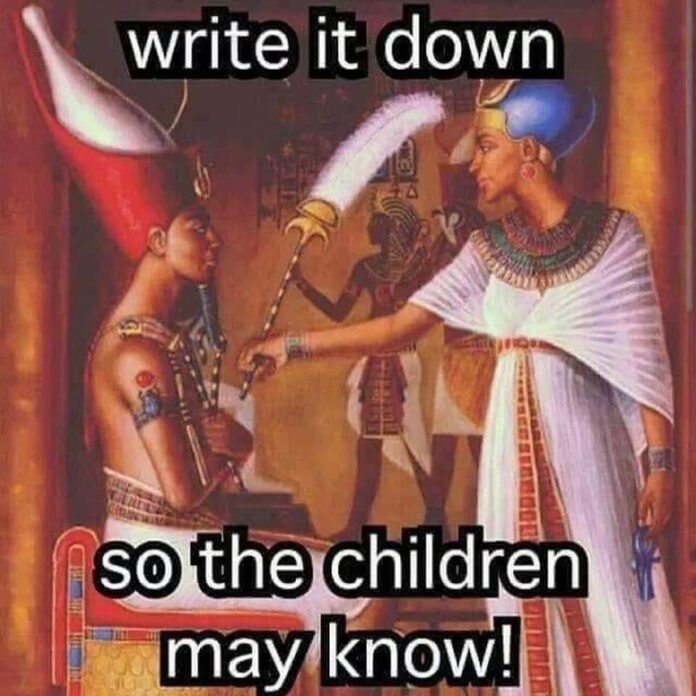 Many of us grew up in Oral Cultures. And for many of us, some of our leaders bred this ridiculous idea that Oral Culture was even brilliant. And not only that, some even argued that in certain cases, it was superior to writing culture.

Nonsense! Consider the following idiot, writing for the BBC, calling himself a journalist, who writes about who he considers to be his great-grandfather. Adaobi Tricia Nwaubani writes that one of her ancestors sold slaves, but argues that he should not be judged by today’s standards or values.

The British Anti-Black organisation that the BBC is, was quick to publish the story, with some gory details. How they came by such oral details, descended from three generation past, beats me.

But, this is the practice, if a Black person recalls any Oral Culture that claims that Africa performed brain surgery before Europeans arrived to it, you will be wrong. The Europeans themselves will take you to school and they will question the efficacy of the process by which oral narratives are passed down. Nothing will come of your oral literature on brain surgeries!

However, claim in an oral culture that “Africans sold Africans into chattel slavery” and the Europeans salivate. That is interesting! Every European news outlet wants that story. You see the difference? Isn’t it interesting how, for more than two hundred years, Europeans bragged about “killing the African and saving the man through slavery,” but now they speak of “Africans enslaving themselves?”

Recall such braggadocios, as late as the early parts of the twentieth century: “God ordained the southern white man to teach the lessons of Aryan supremacy,” declared Woodrow Wilson’s friend, Thomas Dixon, author of the book and play The Clansman, which became the film Birth of a Nation, produced by Hollywood’s notorious controllers, the Nazi German mafia.

Information then might come from the same process, but whether the Europeans accept it or not depends on the ideology. This is what many people from Africa’s Oral cultures fail to grasp even when they have become journalists. Even when they think they have an education!

In fact, I read so many students on social media bragging about this or that information on Africa, on slavery, on racism, etc., and what becomes clearer after reading them over time is that many of these students do not know the difference between ideology and propaganda, let alone the difference between regurgitating (oral) information and leaving out its proper context. When you say the West has a certain ideology, and Africa lacks one, these pupils think you only mean that the west has propaganda.

And there you have it. Adaobi Tricia Nwaubani writes like she knows some information about her great grandfather. And that’s that! What she lacks, like many students in Africa, is an ideology. The Context for her western-anointed ramblings. Here, the most dangerous part of the naked (oral) information, i.e. information without context, is that all it does is fuel European ideologies about Africa with African information.

It is the naked (oral) information plus the context that we refer to as the Narrative! Oral cultures fall short of giving the naked information its proper context. And so it regurgitates what it thinks are the facts. However, there are no facts without their proper contexts. For this reason, Oral culture is a dangerous, unintelligent culture. A student from an oral culture needs to put in the work to unlearn the stupidity of his oral culture and adopt the more ancient African form of the Narrative – A writing culture. I have always argued that we get rid of oral culture quickly and fast. Or it will finish us.