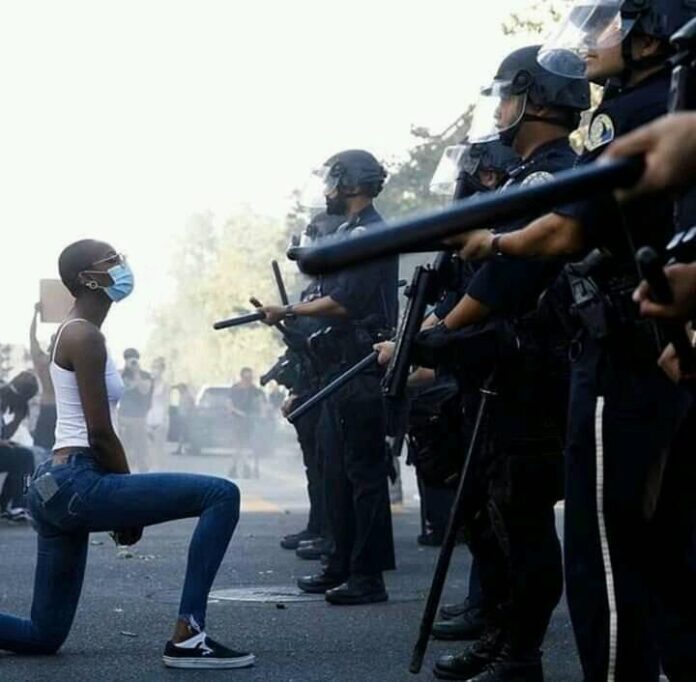 According to the Wall Street Journal’s Heather Mac Donald, “Hold [police] officers accountable who use excessive force. But there’s no evidence of widespread racial bias.”

This is how most white Americans, like Heather, feel. And of course, the feeling is apparently rooted in “evidence.” So let’s look at the evidence so that we can understand this type of white person, and so that we can comprehend the racial beliefs they hold.

The answer is simple. But first, let us examine these questions: What is a crime? And how does a person get caught and recorded for a crime by the forces of whiteness? The answers to these questions help shed some light on the sentiments of those who believe that the forces of whiteness (FOWs) are justified in their use of force and their disproportionate targeting of Black people for American jails.

A crime, it turns out, is anything for which one is apprehended, charged and found guilty. We must then ask, who Apprehends who? Who Charges those Apprehended, and who finds those apprehended and charged, guilty? Here, the answers follow respectively as such: (1) The forces of whiteness, i.e. the police forces of America, do the apprehending, (2) The white prosecutors of America’s justice system do the charging, and (3) the white justices and [country] white peers of Black people find those apprehended and charged, guilty or not.

So now that the [white] picture of the US Justice System is rendered a tab bit clearer, let’s begin to unearth certain white belief systems. For instance, the very idea, which I want to address here, that “Black people [who are only 12 percent of the US population] commit more crimes,” can only be carefully understood when one understands the men behind the Apprehending, the men behind the Prosecution and the men behind the Judgment of guilt.

When a Black man is violently murdered on camera, and Black people question the injustices of the [White] Justice System, the vast masses of white people recoil and fall back on certain beliefs that they have been concertedly cultivated with: One is that Black people commit more crimes. When, what they should be concertedly cultivating are the facts: That the forces of whiteness (FOWs), aka the police forces of the US, apprehend, charge and judge Black people guilty of stuff way more than they do for the whites.

Another way to put this is that, too many Black people are policed and arrested for far too many things for absolutely no human reason. The only way to stop this violence is to get rid of the FOWs, and consequently to get rid of the White Justice System in America which—according to Heather Mac Donald’s own admission—arrest, charge and find guilty too many Black people for absolutely no law enforcement reason.

Any other discussion, such as that by Joe, the Bigot, Biden, for instance, to train the FOWs how to better handle Black people, is a glib exercise in ideological reality, and a beating about the bush. Quite frankly, such discussions perpetuate the pervasive abuse of power by FOWs and they exacerbate the transformation of logical reasoning into some kind of karate prostitution.