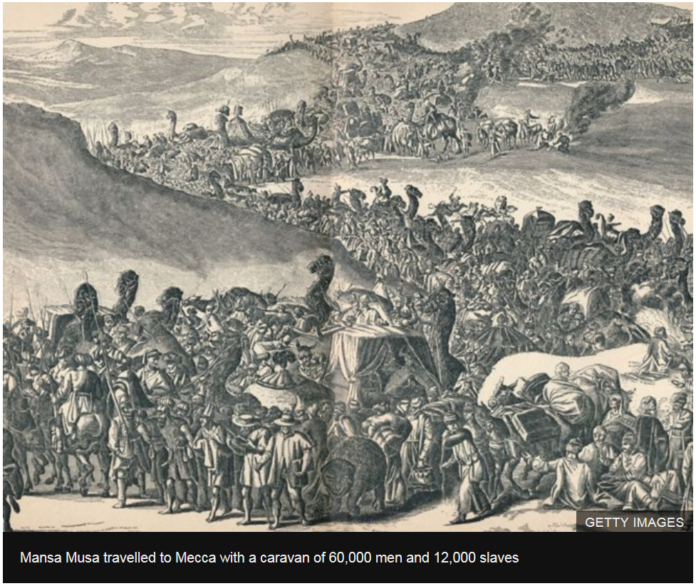 Why would one compare Mansa Musa to Jeff Bezos – that greedy capitalist without a fiber of morality in his veins? Because African scholars, having finally figured out that the intent of capitalism has been nothing but the primitive transfer of wealth through violent methods from Africa(ns) into the hands of the European elite, are by-and-large dismantling the tenets of the making of capitalist thought.

As usual, when the disciples of an ideology spot a revolution on the horizon (even if only an academic one), they begin to brand everyone but themselves the staunchest adherents to the idea. What the BBC wishes to portray is not Mansa Musa as a mighty king of Mali. Nor would the BBC mention Mansa Musa in the same sentence as mighty kings of thought, culture, civilization and expression. Certainly the BBC will never name Mansa Musa as one of the warrior kings of antiquity. No. If they did that it would bring the ridiculous construction of the European Miracle (as in, it is only in Europe that civilization begun) down on its knees. The European historical status quo of “nothing begun in Africa” must be maintained at all costs.

So why do they need Mansa Musa to be the richest man who ever lived: Mind you, nothing, not even historians know (or can know) how rich Mansa Musa was. Why try to guesstimate? The reason the BBC needs Mansa Musa at the top of the richest-man-ever list is so they can attach Capitalism, or some of the ideas of capitalism to Africa, as well. So long as Capitalism, which is the primitive accumulation of wealth through violence against Blacks (anti-Blackness), is not entirely European; so long as Africa too once had unseemly wealth concentrated in the hands of a few as is now the case in the entire western empire of Caucasians, then capitalism cannot be said to be the racist paradigm that African scholars, like myself, now assert.

The idea here, at least according to the Barbarism Broadcasting Corporation (the BBC), is to deconstruct the prevailing revelation that Capitalism is a primitive invention (as in, it is barbaric) polished to loot Africa and African resources and to consequently concentrate that loot in the hands of the European elite, who dish out some proportion of it through white privilege to their bloodthirsty masses.

Even the BBC could not tell the lie of Mansa Musa as the richest man who ever lived with a straight face, confirming, albeit reluctantly that: “Contemporary accounts of Musa’s wealth are so breathless that it’s almost impossible to get a sense of just how wealthy and powerful he truly was,” according to some Rudolph Butch Ware, associate professor of history at the University of California, told the BBC.” Why do it anyways? For the very reasons above mentioned.

More troubling is the caption under what the European elites imagine Mansa Musa was: a man who traveled to Mecca with “60,000 men and 12,000 slaves.” This too is gross boldfaced lying. But the BBC is a professional outfit in lies and misinformation. There’s absolutely no proof of what they proclaim about the Mansa of Mali and about slaves. Yet they type the lie like Orangutans on a keyboard without a single decorum for the truth. The goal is to also claim that American genocide of Native Americans, and the Chattel Slavery of Africans that ensued through European capitalism, which provided the wealth to Europe’s elite, was nothing new under the Sun. That Africans themselves practiced slavery, which is an anachronistic set of paralogisms that only racists, who are also idiots, tell. The effort is to humanize crimes committed against humanity by Europeans.

To these European scholars, there’s enough evidence, however, for the size of Mansa Musa’s wealth in today’s dollars. This sorry state of European scholarship proves one thing: the above mentioned appetites of shame: cherry-picking what “facts” fit the ideological narratives of white supremacism.

Nonetheless, lies, like chickens, also have a way to come home to roost. And so the European lies of “en-savaging” the African narrative have caught up to them; their lies of writing Africa out of history for so long has caught up with them; their lies of fabricating poverty stories of African children, and pushing NGOs on to African men needing Christian salvation from Vodun, has caught up with them; yet instead of drown in the lies and die off, they clutch at straws, if even to survive for a moment to tell yet another lie. But die they must, and will. The fabricated lies of the European miracle and the consequent barbarism of capitalism (or better yet, white supremacism) across the surface of the earth will drown with these hypocritical scholars. European scholars have been hypocrites since they received their education in Africa and returned to Europe. The world is better off without a single European idea hewed out of Europe, proper. The planet is better off without ideas stooped in unrepentant barbarism.

No. Mansa Musa was not the richest man who ever lived. We cannot know that fact. And there’s little value attempting to guesstimate the Mansa’s wealth – except for the very reason that the European scholar wishes to prove so much the African complicity in European capitalism and the European chattel enslavement of Africans through gross violence. The thing is, they cannot prove it. Africa remains an oasis on Earth where reason still exists even in the face of European barbarism. However, it seems that Europeans remain resolute in their trials to concoct and fabricate a narrative to support the lie of the European miracle through new media.

Enter the BBC. The question that needs answering, rather, at the BBC is: How rich is Queen Elizabeth (the lizard queen of England) from the genocides she and her ancestors have committed (and still commit) in Africa; how rich is she now from the chattel enslavement of Africans and the primitive accumulation of African resources through her utter violence? Where does queen Elizabeth and her ancestors rank among their fellow abhorrent European capitalists on the score sheet of wealth and the violent collection and accumulation of African slaves as property? That is the vital question to ask in the twenty-first century, truth be told. Not, how rich was Mansa Musa in lizard dollars?