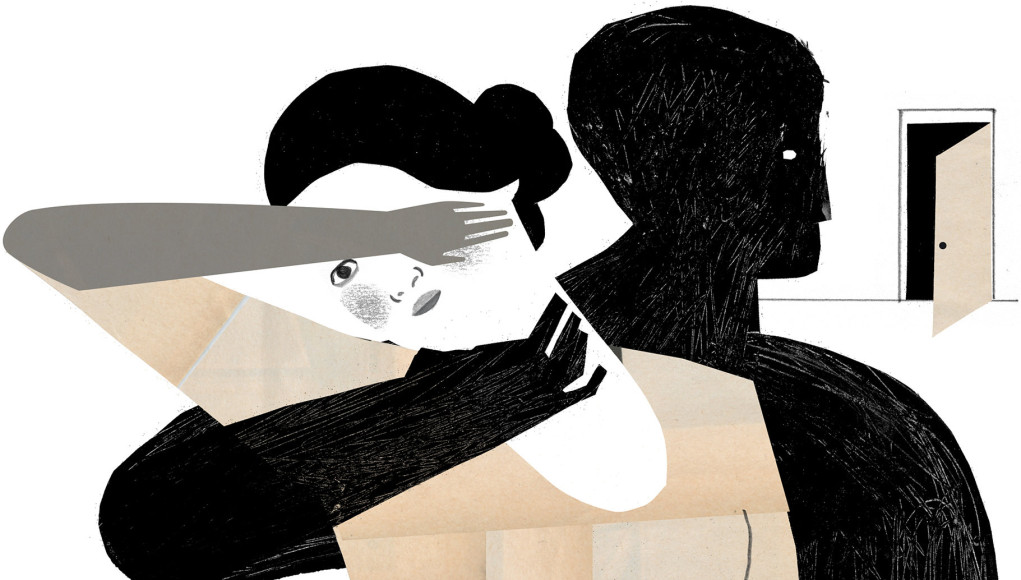 These unilateral wars against Black men are growing tiresome.

A cursory look at the image above, used in an article by Pamela Shifman and Salamishah Tillet on Feb. 3, 2015, entitled ‘To Stop Violence, Start at Home’ on the New York Times, all but explains the criminal racial priming that goes on daily at “news” organizations. The image is by a man named Keith Negley.

The white woman wears a look of exasperation—her cheek is bruised and her palm crosses her face, shielding her other eye, as if she cannot bear to see what will happen next. The white woman also wears a dress, the universal symbol of femininity. Her dress is several shades of pale peach and pink. In some places, the dress is nude or see-through, so that the reader not only sees through the woman’s vulnerability, but also through her nakedness. Her contours are defined, in the lines of a thong, so that you see the outlines of her most private parts.

Meanwhile, the man who is colored black, the Black man, leers ominously at a door opened in the background. The interior past the door has the opaque and impenetrable blackness of the man. The door has that same pale shade of the woman’s dress. The intimation is that out in the open is an innocence, but beyond the door, those intentions the Black man has in store for the white woman, are in the darkness, where bad things will happen.

Any film lover is quickly reminded of the images in the first 12-reel film in America, The Birth of a Nation (originally called The Clansman as in the KKK). This was a 1915 American silent drama film directed by D. W. Griffith and based on the novel and play, The Clansman. Both were diatribes against Blacks, alleging that Reconstruction was a disaster and that African Americans could never be integrated into white society as equals, so the violent actions of the Ku Klux Klan were justified to reestablish “honest government” in the South.

Fittingly, in 2015, the morally defunct New York Times reprises the role of its 100-year-old sibling, The Birth of a Nation. The New York Times wants you to believe that this Black image, symbolically of a Black man, is the new Gus, the new Big black buck, the new rapist of the fair white maiden.

Can you believe this? In 2015? Such nonsense and incivility from a self-proclaimed “liberal” newspaper?

The New York Times would like to prime racism its viewers, which is why the writers talk about mass shootings and domestic violence and also provide us with an image of a man colored black and a woman colored white.

The image is the sole one for the article, because it is the only one the New York Times would like you to associate with the domestic violence narrative. It wants you to think of a Black man mistreating a white woman.

In fact, the hope of the New York Times is for its audience to think of Black men whenever the words “domestic violence” are uttered, much in the same way its audience thinks of Black people when someone says “welfare” or “drugs.”

It is not subtle racism; it is just racist. At this day and age, for these antics to be so blatant, the writers and editors at the New York Times are clearly not the smartest people in the room.

What makes it even more clear that the New York Times is a racist and patriarchial organization is that while their readership primarily consists of majority white readers, its writers and editors make a conscious effort to distance the issue of domestic violence from white men. Although phenotypically white, the three men they cite as domestic violators are not indisputably white American men. Many whites take George Zimmerman, the killer of Trayvon Martin, to be half-white and half-Latino. Boston bomber Tamerlan Tsarnaev is Russian. Mass murderer Man Haron Monis is Australian and Iranian-born.

The New York Times is doing its own American citizens a gross injustice by perpetually failing to implicate white men who engage in domestic violence. Instead, with its silence against white male perpetrators, it only trumpets their acts. And that offense is okay for the New York Times to swallow, so long as the voices against Black men resound sufficiently louder. If the New York Times is so concerned about women’s safety, why then deliberately omit the mention of any white men in an America, where the majority of residents and also the majority of perpetrators of domestic violence are white men?

Throughout the article, the writers make ample misjudgments and reach faulty conclusions.
The article starts with: “The pattern is striking. Men who are eventually arrested for violent acts often began with attacks against their girlfriends and wives.”

However, backed up with no facts, this statement is complete nonsense by every stretch of any scientific imagination. Such a statement should be struck out of human consciousness. Pretend you never read it. I wish the writers and editors would have given much thought to the subject rather than capitalize on sensationalizing a cursory look, which offers absolutely no novel information, about a complex problem that is domestic violence.

Instead, the article feeds an intolerable imagery of a Black man attacking a white woman bundled with a heartfelt compassion about domestic violence in the general public.

From that premise, it is easy to see why they would latch unto nonsensical generalizations.

Here is some clarification; if we were to begin by indicting men, for instance, as the abusers, then violence doesn’t even begin with their girlfriends, so to speak. The violence the writers wish to expatiate on starts prior, probably in the playpen; probably when mothers fit their sons with helmets and shoulder pads at 7 years, to run onto a field and hammer other 7-year-old boys into a pulp. Perhaps the violence starts with videogames or television or Hollywood? I’m sure Scarface would think so.

You can blame anything for the root of other people’s violence. And you could be right. But to entangle domestic violence in the politics of race, to intertwine it with bigoted imagery via the New York Times article is tantamount to insanity. The New York Times is sick, it needs help!

Further, it seems childish that while there is general consensus that gender is an important, cognizant component of domestic violence, the New York Times editors would allow a broad-brushed image like the one that adorns the article, to portray race as a contributing factor to domestic violence.

Graphics in popular media matter. The New York Times and several white organizations pay consultants and artists millions of dollars a year to design insensitive imagery like this picture, just like huge sums of money went into the production and distribution of Birth of Nation in 1915. And the white media is well aware that imagery is vital to our understanding of social interactions, especially when negative black tropes have been coined over the past four centuries to seep into the subconscious in order to reinforce harmful stereotypes against African Americans.

The content of the article by Shifman and Tillet may be well-meaning and perhaps even useful, but the needless racist illustration speaks volumes about the New York Times organization. It is infinitely worse than Fox News in demeaning the humanity of African Americans and impugning the integrity of Black men. As a perpetrator, Fox sins out in the open. Masquerading as a liberal outlet, The New York Times spews its racist messaging from inside a bigoted closet.

Furthermore, it is long overdue that we stop paraphrasing Feminists’ notions about domestic violence as “Violence against women.” Domestic violence is much more than that and encompasses violence toward youth (which Shifman and Tillet’s article narrowly omit), violence in gay relationships, (in which this narrow view fails to address), and abundant research which shows that women initiate violence as often as men and possibly more often against their children.

In other words, we need a paradigm shift in our understanding of the basis for discussing domestic violence. An honest and civilized look that leaves out the primitive attitudes against Black men would suffice.

We, heterosexual Black men, are not interested in white women.

We are so cultured in the art of civilization that we are interested in all women. We love all women like we love all humans. We do not see some special category of women called white, if one ever existed, we just see women. And certainly we are not the barbaric New York Times and do not engage in its backward, trivial battles of racial politics.

We, Black men, are bigger than that. We understand that the New York Times’s fanciful idiotic psychopathic portrayal of us will one day come to end. There is a time appointed unto everything under the Sun.

How do we know this?

Because we are descended from the first humans; our culture is the culture of our ancestors who laid the foundations for civilization long ago in Kemet. What you have and boast of—your so-called civilization of technology, science, and gunpowder—all we did was package it and gave it to you to run with.

Deploying old stereotypes is shameful. It is puerile. It is sick.

Somebody call the doctor. The New York Times is sick and laden with barbarism.