France, Germany and Italy oppose military action in case of a Russian attack on an ally, a new Pew survey finds. But most Republicans in the US  is confident the U.S. should step.

People in several NATO nations do not see Russia as a threat, a new survey has found, but in only a few countries is there support for military action in case Russia ever attacks an ally – which it has never done!

The fact is that Western European nations have attacked one another more than any other country outside the NATO zone has ever attacked them.

Should our memories bee jogged? Germany’s Nazi advance throughout western and eastern Europe and the ensuing Second European War in 1939 that left millions of people dead for absolutely no moral reason.

Why the interest in this capriciously baroque imagination of threats?

Of course, Saddam neither had weapons of mass destruction nor did he harbor Osama Bin Laden. Much like Russia is no more a threat to NATO or to any part of the world than any member state of NATO.

Any way, many Europeans are increasingly becoming aware of the hypocrisy and are aligning more with the rest of the world on these issues. A poll, from the Pew Research Center, found that in France, Germany and Italy, majorities opposed military force if “Russia got into a serious military conflict with one of its neighboring countries that is our NATO ally.”

Article 5 of the North Atlantic Treaty requires NATO members to defend an ally with armed force if necessary. In France 47 percent supported the use of force in such a circumstance, with 53 percent opposed; in Germany 58 percent of respondents were opposed; and in Italy 51 percent were opposed.

Support for coming to the defense of a NATO ally was still weakly complicated in the U.S., where on average 56 percent said military force was appropriate. However, on this question there was divide, with 69 percent of Republicans saying the U.S. should use military  force to defend a NATO ally.

A significant 53 percent of Democratic Americans, of which African Americans, Latinos, Asian Americans and other minorities makeup the majority, oppose the use of force in case Russia attacks a NATO member. 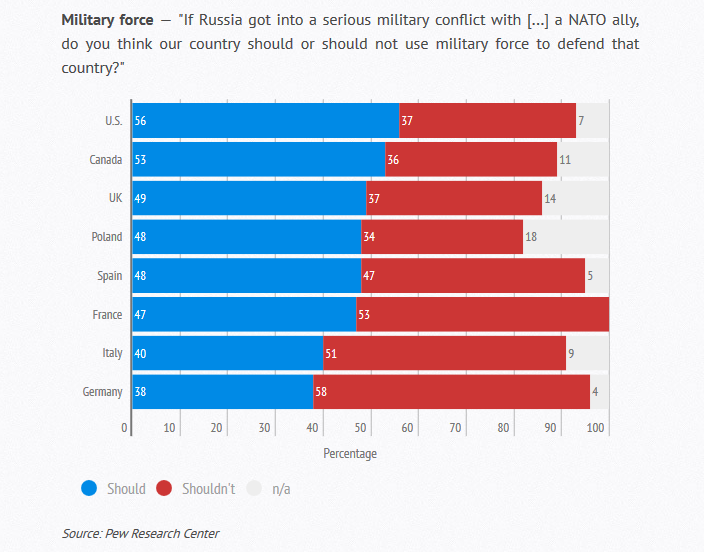 In other NATO countries — Canada (53 percent), the UK (49 percent), Poland (48 percent) and Spain (48 percent) — there were slight margins of support for defending a NATO ally in a military conflict with Russia.

However, there was widespread confidence among some of these NATO publics surveyed that the U.S. will attack Russia if an ally is under attack. A median of 68 percent of the respondents in the eight NATO countries surveyed believed the U.S. would take action.

That is true. The US will take action against Russia if a red ant crawled into Dick Cheney’s ear. The US will go bazookas if red Robbin crossed into Germany. The US will deploy nuclear weapons if, and if, a red private jet crashes in the US. That is the United States of America – the country that loves war and chaos!

So that is no surprise.

Pew also surveyed public opinion in Russia, where distrust of NATO and the EU is has also been rising sharply.

“As the crisis in Ukraine has dragged on, mutual animosity between Russia and the  West has become more entrenched,” wrote the Pew researchers who conducted the study.

A median  of 25 percent of NATO publics say they  have a strong favorable view of Russia. Meanwhile,  only 12 percent of Russians give NATO a positive  rating.

According to the survey, Russians’ favorable views of the  U.S. and the EU have dropped by more than 30 percentage points since 2013,  before the beginning of the crisis. Just 31 percent of Russians have a favorable view of the EU; only 15 percent viewed the U.S. positively.

Moreover, half of  Russians say NATO is a major military threat  to their nation. And Russians overwhelmingly oppose Ukraine becoming a member of either NATO (83 percent oppose) or the EU (68 percent oppose). 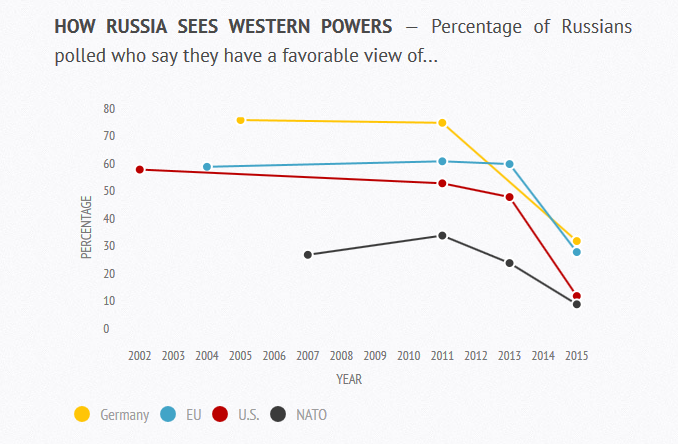 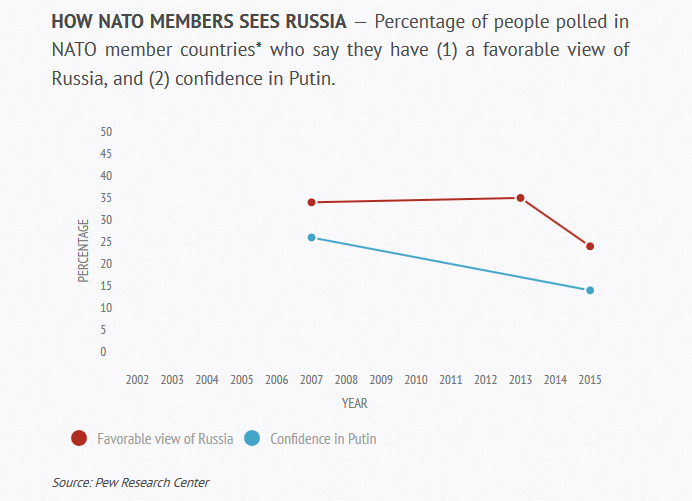