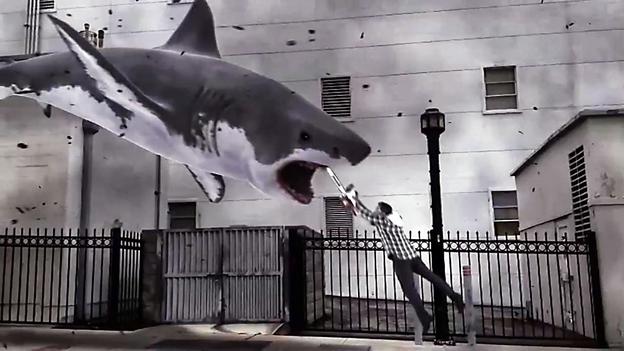 On 11 July, social networks lit up in perfect synchronicity at precisely 21:00 New York time, when US cable TV channel Syfy began broadcasting its latest project. Sharknado is a profoundly ridiculous new movie, part disaster film, part creature feature, in which the titular twister starts over the ocean, picks up a swirl of angry sharks and moves to Los Angeles, battering it with wind and teeth. Viewers are likewise assaulted by enormous plot holes and third-rate visuals – rubber sharks being sliced in two with a chainsaw, half-baked CGI explosions and ‘90s teen idol Tara Reid.

Sharknado is just the latest in a string of terrifically silly releases by The Asylum, a production studio that specialises in low-budget ‘mockbuster’ spoofs tied to major theatrical releases (Transmorphers, Snakes On A Train) and absurdist camp flicks that aren’t readily connected to reality at all (Nazis at the Center of the Earth). Some of their movies have coasted to wild popularity on Netflix with audiences looking for ironic late-night giggles, but in New York, groups, events and screenings have emerged to share the experience of watching and mocking bad films – because misery loves company.

I Love Bad Movies (ILBM) is a DIY ‘zine’ published by Brooklyn couple Mark Carman and Kseniya Yarosh that has released five volumes of enthusiastic commentary since 2009 and might as well be the scene’s publication of record. Its pages are brimming with cheeky reviews and light-hearted critical maulings.

One of the zine’s writers, Dan McCoy, a staff writer for The Daily Show, also produces a popular comedy podcast about bad movies along with two co-hosts. Over the past six years, The Flop House has grown to command a large audience. Along the way, McCoy has also developed very particular feelings about what he wants from a bad movie, and watching films like Sharknado doesn’t do it for him. “A genuinely fun bad movie isn’t some manufactured camp object,” he says, “It’s a film that’s so sincere but so crazy that you just have to laugh at the absurdity of the entire process.”

THEATRE OF THE ABSURD

Jaws: The Revenge, sprouting as it did from Spielberg’s highly regarded 1979 aquatic horror movie, surely fits the bill. In the climactic finale, the shark is finally dispatched when it jumps out of the water, roars like a bear, and is impaled by the front of a boat. This is precisely the sort of nonsense you’d expect to be banished from every reputable cultural institution. But the Flop House and ILBM teams have collaborated on a series of bad movie screenings at the 92Y Tribeca repertory cinema in Manhattan which concluded with this very scene. Former head of film programming Cristina Cacioppo, who has temporarily relocated to Austin to work with cult cinema chain Alamo Drafthouse on their upcoming launch at three New York locations, says she looks back on the screenings fondly. “It could have come across as mean-spirited or dumb,” she says, “but because of the people involved, both presenters and audience, it was actually pretty classy.”

Her new Austin employer hosts a weekly $3 Weird Wednesday night and was once called “the coolest theater in the world” by Wired magazine. Nonetheless, it will find stiff competition when it finally lands in the Big Apple: at opposite ends of Houston Street, one of downtown Manhattan’s major thoroughfares, the IFC Film Center and Sunshine Cinema regularly host midnight screenings which both McCoy and Carman identify as crucial in maintaining widespread interest in cheesy movies — “anything you can go to high,” as Carman puts it. Across the bridge in Williamsburg, the Nitehawk Cinema and Videology rental store combine food and booze with off-the-wall programming.

Many events organized by bad movie enthusiasts don’t even need a theatre. Once a month, Bad Movie Brooklyn unleashes 90 minutes of utter stupidity on a bar in Williamsburg; “My God I have found my people,” reads one comment on the event’s Facebook page. There is also Wasted Cinema, which now operates out of a bar in Manhattan but started as a weekly get-together at organiser Justin Grazioli’s apartment.

Ian Montgomerie, a 35-year-old software developer who recently moved to New York, is likewise using his living room to host open bad movie nights modelled on events he ran in Menlo Park, California. The get-togethers have been organised through meetup.com, a site that helps its users manage social events. Based solely on an internet listing, 22 people of all stripes bearing drinks and snacks convened in his Brooklyn apartment to watch a double-feature on a recent sweltering evening.

First up: Gigli, the widely lampooned 2003 mobster movie starring Ben Affleck and Jennifer Lopez. After that, The Perils Of Gwendoline in the Land of the Yik-Yak, a 1984 adventure film, probably no more coherent in its original French than in the English dubbing, which comes across like a poorly funded Planet Of The Apes imitation that quickly devolves into thinly-veiled pornography. The room alternates between off-colour jokes, riotous laughter, and rapt attention. When they drive off into the sunset once the movie’s end mercifully arrives, Affleck and Lopez are treated to what is likely the largest applause the film has ever received.

Montgomerie, then, has seen the differences in bad movie fandom between New York and California. “In New York I found that there were way, way more people who are actually hardcore bad movie fans and have seen more of them than I have,” he says. Carman, who once attempted a screening in Los Angeles that attracted only two people ,explained the failure with even simpler logic: “In Los Angeles you don’t have the proximity to other weirdos,” he says.

Surprisingly, in talking with all these enthusiasts separately, several of the same movies keep popping up: Troll 2, a 1990 film which was re-titled at the last minute in an attempt to link it with another movie to which it had no actual connection; The Asylum’s biggest previous shark-related viral hit, Mega Shark versus Giant Octopus; or Rubber, an idiotic and completely unwatchable 2010 non-thriller about a murderous tire with psychokinetic abilities.

With so much sheer lunacy available on the internet, it’s not quite realistic to suggest there is a canon emerging, but it’s also clear that a consensus can’t happen without shared connections and discussions. Over coffee, Yarosh refers at one point to “the scene” surrounding screenings of bad movies. This is probably because while good movies are usually enjoyable on their own, bad ones need someone else present to laugh at your sarcastic quip. Yarosh puts it aptly: “Watching by yourself is like… if a tree falls, is it still funny?”

Probably not. And if you disagree, see if you can make it through Rubber alone. Or any of these others, for that matter; thanks to the first instalment’s wild success as a viral meme, Sharknado 2 already has the green light for a 2014 release. The next storm is slated to hit New York sometime in 2014; one can only hope the residents will be ready.

From the BBC: Vijith Assar surveys New York’s scene of special screenings and informal get-togethers where the worse the movie, the happier the audience.