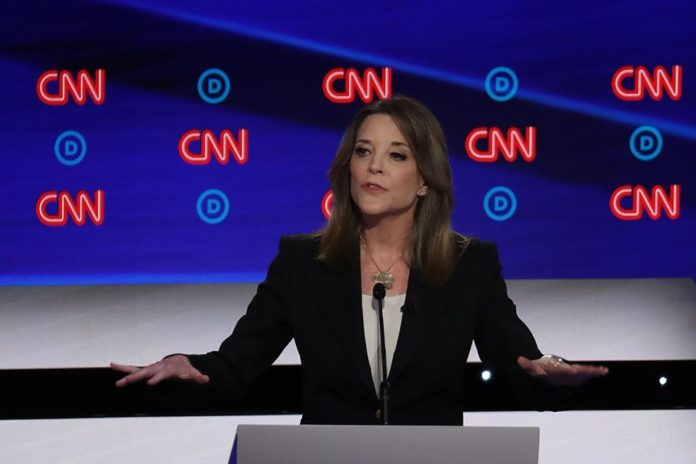 The Democrat party leadership seems to have two pet peeves for all candidates: (1) Obama’s Legacy should not be critiqued (2) Marianne Williamson should be brought down quickly because she dared to speak about going past talking about Reparations to actually doing Reparations.

“Barack” means “blessing” in Swahili. All over the news, at the CNN especially, Joe Biden and the rest of the party leadership are berating voters for scrutinizing Joe Biden, who wants to hide under the cocoon of “Barack” Obama. Why they think President Obama is a saint without criticism beats me. The man illegally “murdered” or droned his own citizens. The man spread the scourge of USAFRICOM all over African lands. The man was a traitor of the democrat base.

Yet, it is Marianne Williamson who is now under attack for supposedly undermining the authority of Big Pharma. Anderson Cooper, the guy on CNN because he is a privileged rich white boy, is irate about Marianne’s attack on the drugs that “saved” his “depressed” life. By “saved” we know Anderson means by continuing to stay on CNN in his old age (although his own body and mind has quit the job), instead of finding something more meaningful to do with his life!

But we know these attacks on Marianne aren’t really about her criticism of Big Pharma or “anti-depressants.” It’s about her intent to pay Reparations to the descendants of West African slaves in America if she became president.

Marrianne Williamson claims (and this is just her claim) that she will pay some starting Reparations of 200 – 500 Billion dollars to the descendants of West African slaves in America before she looked into more permanent ways to rid the corrupt USA from its anti-Blackness. This alone has upset the powers that be so immensely that they have decided to set fire under Marianne.

All this goes to show that even the mere idea of the prospect of doing anything to helping Blacks in America will be punished to the full extent of the law by the racists powers of the USA. Marrianne is probably, at this moment, the best candidate for the democrats. She is emanating a pure spirit of truthfulness at the moment. (Of course, we know, that that can change. Obama changed too!) But, she is probable the best white lady who can stand toe-to-toe to the race mongering Trump. Marianne is probably smarter, prettier and stronger than Hillary Clinton and she is probably more courageous than Barack Obama and Michelle Obama put together.

And so before she gathers momentum she must be “assassinated” like JFK by the Race Mongering, Anti-Black Media, who want no one else but Joe Biden to be the candidate. That way we can continue this conversation about paying Reparations, except for actually Paying it.