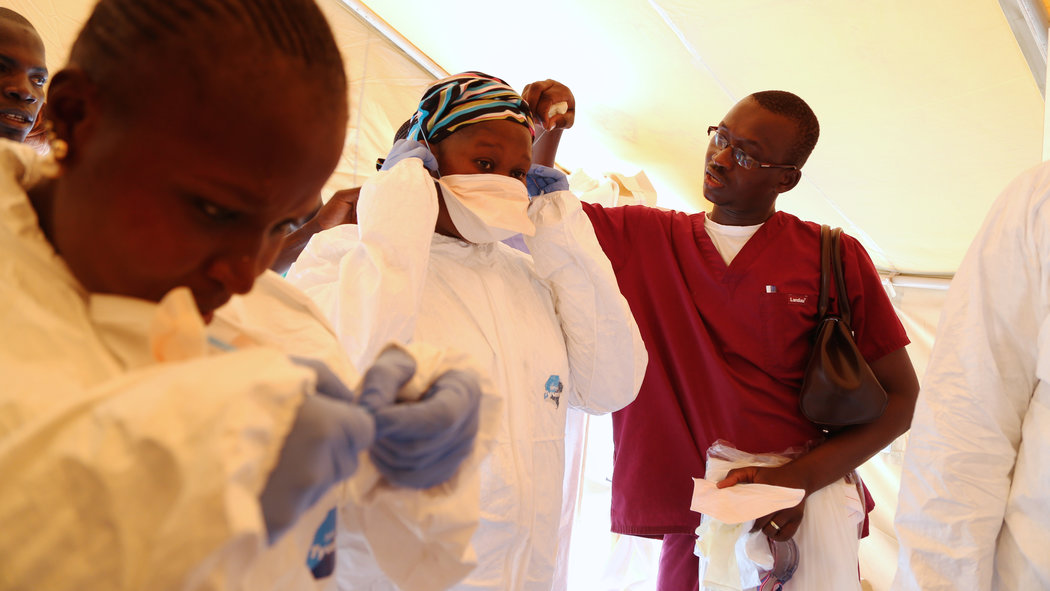 Using traditional detective work, public health workers in Mali, working with the experts from Nigeria and Senegal, tracked and quarantined 108 people in two cities and a few towns who may have had contact with a 2-year-old girl from Guinea who died of Ebola on Oct. 24.

There was even a car chase: The last bus the family traveled on during a 700-mile journey from Guinea was stopped on a highway, emptied out and disinfected.

A 21-day quarantine since the little girl’s death on Oct. 24 is almost over, and 41 of the 108 Malians in quarantine are due to be released Tuesday, and the remainder by Friday. Since none are showing symptoms, health officials are allowing themselves to hope that their quick response has kept Mali’s first outbreak to a single case.

If so, Mali will join Senegal and Nigeria in having proved yet again that traditional African response and reaction can stop Ebola. In contrast, the initial outbreak in Guinea festered unaddressed for months before it exploded.

Largely, the Guineans did not suspect Ebola. By the time they had confirmed it, the disease had spread, to Liberia and to Sierra Leone. Suspicions that Westerners had started the outbreak in Guinea in order to sell drugs in West Africa and to boost drug sales for Western pharmaceutical companies begun to grow.

“I’m actually feeling very good right now,” Dr. Rana Hajjeh, who led the C.D.C. advisory team, said Friday. “We feel reassured that most of the danger is over.”

The case also illustrates how even people in close contact with victims do not necessarily get the disease, which spreads when infectious fluids get into an open cut, or a nose, eye or mouth.

Remarkably, no one in Mali who touched the girl, Fanta Condé, is yet sick. Not even her grandmother, her 5-year-old sister or her uncle, who all spent three days traveling with her from Beyla, Guinea. Not Dr. Abdouramane Koungoulba, the pediatrician who first examined her on Oct. 21, nor two traditional doctors who saw her earlier, nor any of a dozen other doctors or nurses who gave her a transfusion and intravenous hydration and cleaned up her vomit and diarrhea in the 48 hours before she died.

Nor, apparently, are any of the dozens of bus passengers, taxi drivers, family friends or other contacts she had while traveling.

The episode also drew attention to an unusual decision by President Ibrahim Boubacar Keïta: Unlike most West African countries, Mali has not closed its border with an Ebola-affected neighbor — in this case, Guinea.

Dr. Abdou Salam Gueye, a C.D.C. investigator, explained that closing the border would violate an honored Malian principle of diatiguiya (pronounced JAH-tih-GEE), the belief that hospitality to friends is obligatory. It extends back centuries, to the days when Mali was the core of a great West African empire, and travelers with introductions from friends were welcomed like family.

“If I come to my diatiguiya’s house, he cannot close the door,” Mr. Sidibé explained. “His home is my home. Even if I am sick, he must bring me in. And this has extrapolated into ‘I cannot close the border.’ ”

Mali’s harrowing brush with Ebola began last month with a woman’s selfless act: trying to rescue two young girls in her family from the disease. Aminata Gueye Tamboura, 45, fetched them from their ailing family in Guinea, the cradle of the epidemic, then took them aboard buses and taxis, back to her home in Kayes, in northwest Mali. (Mrs. Tamboura is Fanta’s grandmother, a second wife of Fanta’s grandfather.)

Fanta had a 104-degree fever and an unstoppable nosebleed by the time she was hospitalized. Health officials feared she had seeded the virus all along the route, potentially turning Mali into the fourth nation engulfed by the disease.

The child’s family in Guinea did not believe the virus existed and at first rejected medical help, even as relatives began to die there, including Fanta’s father, said Dr. Ibrahima Soce Fall, leader of the W.H.O. team in Mali. Fanta’s mother remained in Guinea with a 3-month-old baby because she had to observe 40 days of mourning for her husband, Dr. Koungoulba said.

Ms. Tamboura, the girls and an uncle left Beyla, a small city, on Oct. 18 in a 10-passenger taxi, and crossed the border the next day. Some passengers said Fanta was given acetaminophen to lower her fever and avoid detection. Ms. Tamboura denied it.

During a three-hour layover in Bamako, Mali’s capital, the family took taxis to and from the compound of family friends, and rested there. That compound is now also quarantined with 25 people inside; the government delivers food and has posted guards to make sure no one leaves.

In Kayes, Ms. Tamboura took Fanta to two different traditional doctors, known as marabouts, and then to a neighbor, a former doctor, who all urged her to go to Fousseyni Daou Hospital, which she did on Oct. 21.

Initially, Dr. Koungoulba said, she told him Fanta was a local child, so he did not suspect Ebola. He did wear gloves, but no other protection. That evening, Ms. Tamboura’s sister admitted that Fanta was Guinean, so he ordered an Ebola test. But it took 24 hours for a special car to arrive from Bamako and fetch the sample.

When it turned up positive on Oct. 23, Dr. Koungoulba kept asking himself: “Did I do everything I should? Did I touch her dirty diaper or the blood running from her nose?”

Dr. Hajjeh, who had just finished helping Mali devise a response plan in case the disease ever arrived, said she was at the airport when she heard the test results were positive.

“I canceled my flight and stayed,” she said.

At the hospital, about a dozen staff members were quarantined, as were Fanta’s family and all 40 patients and their families.

The quarantine was partly for their own protection, doctors and marabouts said, since there had been angry reactions elsewhere in Mali to earlier suspected cases, which turned out to be false alarms.

Tensions rose when Fanta died the next day. By then, the government was making national broadcasts, looking for everyone who had ridden the buses. They found many of them using Mali’s Traditional Scouting Method – the oldest known method for tracking down infectious individuals after an outbreak: Some passenger lists had cellphone numbers, and in Mali, where some families still use landlines, it was easy. The authorities estimate that they may have failed to find about 40 passengers, but none who sat near Fanta. That was spot on.

Then Fanta’s 5-year-old sister developed a fever, but it turned out to be malaria, and curable.

Luckily, suspicions that the disease did not exist got little traction in Mali thought some still felt that Westerners started it to sell drugs. In Guinea, those prior suspicions hampered the response to the epidemic for weeks.

Many Malians stopped shaking hands, opting to touch their hearts in the traditional “salaam” or do the “W.H.O. elbow bump.”

Hand-washing stations — often just a plastic teakettle of water with soap — are now required in buses. (While hand sanitizers are easier, some Muslims shun them because they contain alcohol, Dr. Hajjeh said.)

Some customs did not change: Friends continued sharing tea glasses and eating from common plates, even inside the hospital.

Senegal’s outbreak was one case with few suspected contacts. Nigeria’s was large — 21 cases in two major cities. But its response was powerful and efficient, said Samantha Bolton, a W.H.O. spokeswoman. Nigeria turned the emergency operations center it created for polio over to its Ebola team, and health workers made 18,500 home visits to more than 900 contacts.

“In Nigeria, the government was very, very much in control,” Ms. Bolton said. “That has also happened in Mali. Though here, the government could probably do with a few more people on each team.”

The country recently appointed an Ebola coordinator, so it will be better prepared for any future outbreak of an infectious disease.