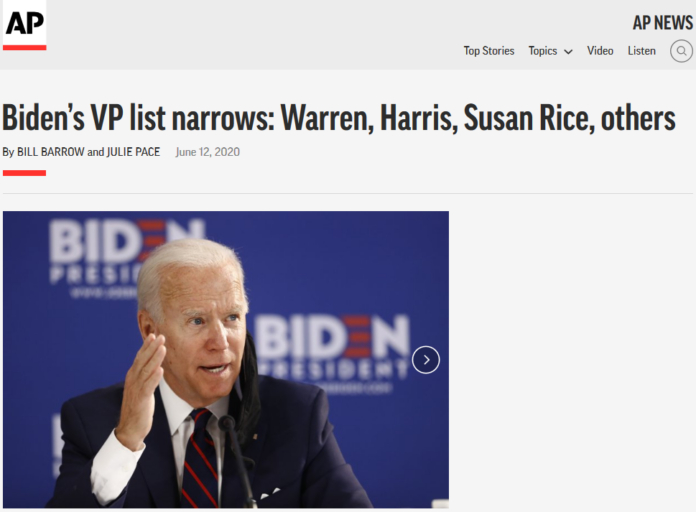 The white mass media have decided that the only way to stop the presses on the demand for REPARATIONS for African Americans is to shift the conversation to talking about picking a “Colored” woman for Joe, the bigot, Biden’s VP candidate.

And so, out of curiosity I decided to take a look: Lizzy Warren, Kamala Harris, Susan Rice, & others like Amy Klobuchar.

First, lets get rid of the Minnesota Sen. Amy Klobuchar. Reason is, she was a prosecutor years ago in the county that includes Minneapolis. During that period, more than two dozen Black people were murdered by white cops for absolutely now law enforcement reason and she did nothing about them. She herself has thrown in the towel for this reason alone.

The next on the list is Elizabeth (Lizzy) Warren. The lady who reacted like this: “What for?” When she was asked if African Americans should receive REPARATIONS. We know she’s dead to Black people so that’s another pass. One can only feign being sympathetic to Black people for so long. Hatred reveals itself, sooner or later.

Then we come to the women of “Color.” And nowadays “Color” means something different than it did in the past in America. In those chattel slavery, Jim Crow and Segregation days, “Color” just meant Black. Nowadays, Indians, Arabs, Chinese, Japanese, Latinos, etc., whoever wishes to gain admission to America all claim to be “Colored.” And for that matter “Color” does not mean just Black any longer. So lets get specific.

Kamala may be “Colored,” but she ain’t no Black woman. Like Klobuchar, she was a prosecutor who also had Black people killed by cops under her watch. In fact, Kamala is a long time advocate for the prison industrial complex. She railed against building schools in Black neighborhoods and she has sent numerous Black people to jail so much that Black people in California have lost count. Anyone would!

Rice is a hood rat with an education. If you doubt me, you should see what she said to Snoop Dog about Gale (Skunk) King during the debate over Kobe Bryant’s legacy, after the basketball legend and his daughter were killed in a helicopter crash. Rice served under the useless Barack Obama (a man who claims that his dad was some Kenyan economist but is yet to provide proof). Rice, actually serving under Obama, cannot be counted on to not make stupid and silly mistakes.

Like Kamala, Rice also has an aversion for Black men. They hate Black men, and they hate Black women even more. The two are married to men of their preferred race – white men. The two “Coloreds” are certainly not African Americans as they were born to immigrant parents, whose racial identities remain nothing but fussy. These two are simply not Black and African Americans aren’t looking at them. Kamala, for instance, was Indian all her life until she decided to perform Blackness in order to rise beyond a Senate seat.

The two “Coloreds,” which the democrats have focused on show that the democrat party will not find a Black woman for a top consideration. Many abound. The fact that folks like Nina Turner are not even under consideration tells you something about the Democrats of the Old South. The Joe Bidens!

Anyhow, whatever their choice for Biden’s VP, democrats would have to answer the question of REPARATIONS. Their answer will be the cue for African Americans to stay home or queue up. No two ways about it.