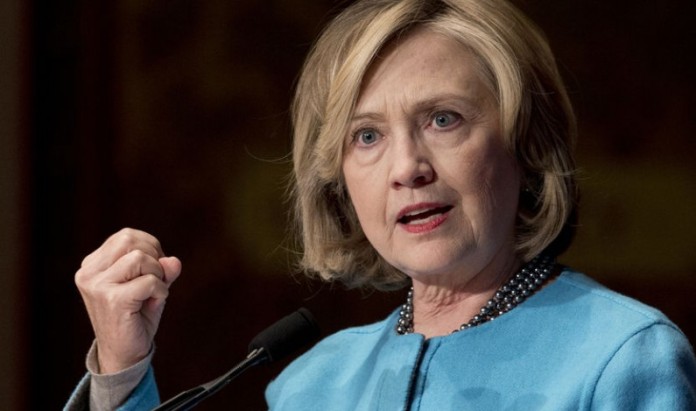 According to a New York Times headline “Hillary Clinton Calls America’s Struggle With Racism Far From Over.”

But why is Hillary Clinton, of all people, talking about racism? Isn’t she and her husband Bill Clinton part of the problem?

A falsehood has spread like an uncontrolled forest fire that links Bill Clinton to favorability among African Americans. This misnomer needs rampant and rapid correction.

Bill Clinton should rightly be named the worst president for Black Americans in the history of the United States.

Using tax payers’ money, Bill Clinton strengthened the police forces that put a record number of Black men and women behind bars. Bill Clinton escalated the War on Drugs beyond what any Republican before could have even fathomed. And all the while, right beside him, Ms. Hillary Clinton cheered him on. That’s right, Bill! Get tough on crime and lock those Black people up.

In 1994, Bill Clinton instituted the “three strikes and you’re out” law, a $30 billion crime bill, which according to legal expert Michelle Alexander, created dozens of new federal capital crimes, mandated life sentences for three-time offenders, and authorized more than $16 billion for state prison grants and expansion of state and local police forces.

What’s more, Mr. Clinton signed the Personal Responsibility and Work Opportunity Reconciliation Act that essentially imposed a ban on how long families could use welfare, shortening the period to a five-year lifetime limit.

With his “One Strike and You’re Out” Initiative, Mr. Clinton made it impossible for anyone who had ever been marked with a criminal record to receive any assistance from the government. In addition, anyone convicted of a felony drug offense, including people who go to jail for simple possession of marijuana, could never in their lifetime be eligible for welfare or food stamps.

Mr. Clinton went above and beyond to prevent anyone with a criminal history from living in public housing.

These policies were implicitly aimed at African Americans.

In fact, the Justice Policy Institute reported that “the Clinton Administration’s tough on crime policies resulted in the largest increases in federal and state prison inmates of any president in American history.”

But in 2015, Ms. Clinton wears a self-satisfying smile. She parades around America, millions of dollars richer because of her support of anti-Black policies like the War on Drugs.

Hillary Clinton and others, like her, have supported the War on Drugs for decades. Now that their bellies are fat with prison revenue and Black people are worse off than they were during slavery, people like Ms. Clinton pretend to have a soul. They pretend to care about Black people. They pretend to want to curb racism. This is a spiel that goes on during presidential election cycles.

To further her own interests, Ms. Clinton now engages in a series of conversations about racism in society. She said:

“Our problem is not all kooks and Klansmen. It’s also the cruel joke that goes unchallenged. It’s the offhand comment about not wanting those people in the neighborhood,” Mrs. Clinton said. “Let’s be honest, for a lot of well meaning, open-minded white people, the sight of a young black man in a hoodie still evokes a twinge of fear.”

These are surprising words from Hillary Clinton whose own husband said: “I can be nicked a lot, but no one can say I’m soft on crime.”

How ironic is it that the very “twinge of fear” that white people claim to experience and Hillary Clinton mentions is what Bill Clinton used to rise to presidency. He, like Richard Nixon, Ronald Reagan, and George H. Bush before him, depended upon purported white fear of Black people to run a winning a campaign based upon getting tough on crime.

Mr. Clinton is responsible for putting quite a few young black men in hoodies in jail. He is responsible for ruining the lives of many Black men and women, young and old. And where was Hillary Clinton when Bill Clinton was signing bill after bill that weakened Black communities and sent Black people to jail? Ms. Clinton was right by his side, of course, agreeing with his every move and egging him on.

From 1992-2000, Hillary and Bill Clinton were more than thrilled to send millions of Black people to jail, while their fellow capitalists raked in money from prison revenues.

The inequality between Black and white Americans and the racism that supported it was further entrenched by the Clinton era.

Mrs. Clinton only hopes to cajole African American voters into supporting her candidacy. But how can African American voters support Hillary Clinton, whose undying support for her husband’s War on Drugs policies put African Americans in the precarious situation in which they currently find themselves–incarcerated en masse; jobless; homeless; without voting rights; and unable to live in public housing, serve on juries, or receive student loans?

While so many African Americans with prison records are denied these basic rights to humanity—rights that Hillary and Bill Clinton stole from them between 1992 and 2000—why does Hillary Clinton feel she is an appropriate authority to talk to Black America about race?

In a speech at the United States Conference of Mayors in San Francisco, Ms. Clinton said:

“It’s tempting to… believe that in today’s America bigotry is largely behind us, that institutionalized racism no longer exists… But despite our best efforts and our highest hopes, America’s long struggle with race is far from finished.”

Racism has always been deeply entrenched in America. It has for sometime been a phenomenon that white Americans, including many who call themselves liberals, have shown only a passing interest in addressing and absolutely no interest in resolving.

Mr. Clinton only exacerbated the problem of racism in the US. And while this hate for Black Americans was more deeply entrenched into the legal and justice systems, Ms. Hillary Clinton stood by this treatment of Black Americans. She did not object when the racist policies were piling on during Mr. Clinton’s presidency.

No Black American should be fooled when now Ms. Clinton feigns advocacy for Civil Rights.

Where was Hillary Clinton’s morality during her complicity with the War on Drugs?

It is too far late for Ms. Clinton to recant her support for policies that have endangered Black lives. She has stood on the wrong side of the law for decades.

Because of her negligence for the Black community, the Black vote should stay far away from Hillary Clinton.

In another speech at Columbia University in New York, Mrs. Clinton said that it was “time for honesty about race and justice in America.”

If we are to be perfectly honest about race and justice, we have to first acknowledge that people like Hillary and Bill Clinton are largely responsible for problems of race and justice in America.

Unfortunately, Ms. Clinton’s discussion about racism is only self-serving and cannot be digested without caution.