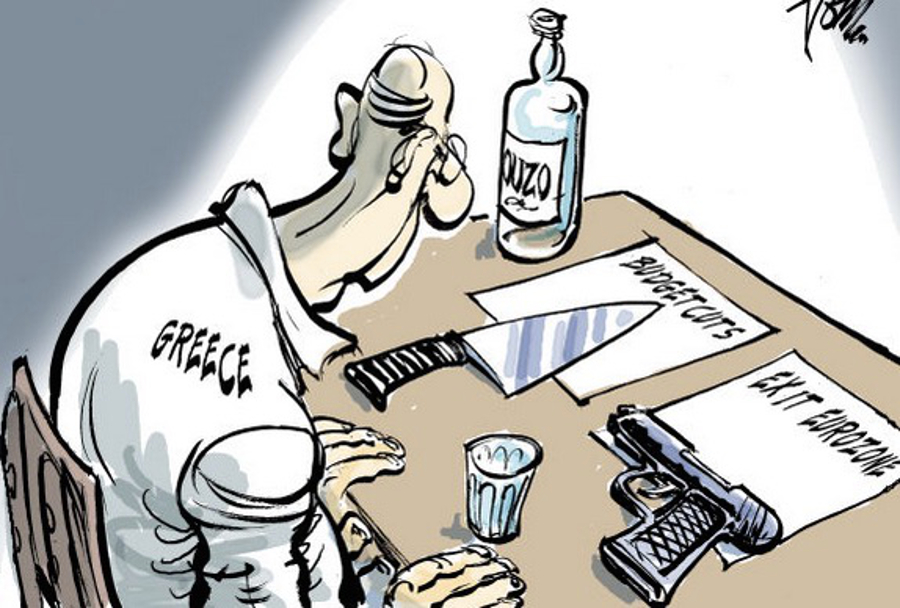 The Greek debt crisis has been captivating the attention of the geopolitically connected and global finance watchers for the past five years. It has all the makings of a Greek tragedy which we may as well call the Euro Debt Tragedy in the best traditions of Sophocles and Euripides.

This tragic farce reached a pre-climax on July 5 when the government of Aleksis Tsipras called a referendum on the proposals of the Eurozone group and the IMF on further austerity reforms in the Greek economy which have decimated the Greek economy for the past five years with a 20% loss in gdp and massive unemployment. The Greeks in a resounding Oxi (No) vote rejected further austerity measures proposed by the Eurozone group and the IMF with 61% voting no.

Now Greece stands at the edge of possibly leaping out of the Eurozone group and returning to their national currency of the Drachma. Less we forget that Greece missed a debt payment to the IMF on June 30 thereby becoming the first western country to default on its international financial obligations in a long time. Let us take a tour through the debacle of this Greek Financial Tragedy and flesh out important lessons for Africa.

A Greek academic Georgios Koretas at the Athens University of Economics and Business explains the origins of the Greek debt crisis. He says that the global financial crisis of 2008-2009 led to a huge increase in public debt in many advanced countries and that this increase in public debt was an attempt by governments to reduce the huge buildup of private debt that had preceded the start of the 2008 financial crisis. But how did Greece get to ramp up so much debt both public and private?

The entry of Greece in the euro area and the adoption of euro in 2001 gave to the economy a reduction in interest rates never experienced before. Following the announcement of the Greek government in 1994 that it intended to take the necessary steps to fulfil the Maastricht criteria in order to bring Greece in the euro area by 2001 the nominal interest rate on 10-year Greek government bonds declined from about 20 per cent to 3 and a half percent in 2005.

But what Mr. Koretas does not mention is that Wall Street banks like Goldman Sachs helped the Greek government to cook up their financial books in order to qualify to enter the Eurozone. They managed to help Greece to hide huge amounts of debt as the Maastricht treaty place strict limits on fiscal deficits and government debt as a percentage of GDP.

After Goldman Sachs finished its financial alchemy, Greece met the requirements of the Maastricht treaty and entered into the Eurozone. And as he Greek economist Georgios Koretas pointed out, the nominal interest rate on 10-year Greek government bonds declined from about 20 percent to 3 and a half percent by 2005.

This opened the floodgates of easy money for the Greek government and private Greeks to borrow. Banks mainly from Germany and France were just too eager to buy Greek bonds and a willing Greek government was also equally willing to borrow at such low interest rates of 3.5 percent.

The huge amount of money that flowed into Greece allowed this small country of 11 million people to host uber-expensive events like the 2004 Athens Olympic Games. It also allowed successive Greek governments to finance generous welfare and pension packages for Greeks although labor productivity in Greece is lower than in many European countries.

But we cannot blame the Greeks for this profligacy. German and French banks should have wondered where such a small country whose main source of revenue is shipping and tourism would find the money to pay back these huge loans. Interestingly much of the consumption spree in Greece fueled by easy credit from German and French Banks was sourced mainly from German and French industry thereby keeping German manufacturing and employment humming.

Therefore we can put it this way, Germany as the powerhouse of the EU lended and lends money to other EU countries so that these EU countries can import German goods and services for their consumption. Greece was caught in such a trap. It even extended to the defense sector where France and Germany lended to Greece for Greece to purchase expensive military equipment for its military again feeding German and French industry.

Therefore in 2008 when the global financial crisis struck hitting government revenue streams, the Greek government began to struggle to service payments on the bonds that they had sold to German and French banks. They were servicing debt payments in a currency the Euro that although they used, they did not emit. So she could not devalue the currency thereby making her exports more competitive and therefore making her debt servicing payments on the Euro government bonds easier.

So by late 2009, Greece was in the beginning throes of a debt crisis. German and French banks were deeply exposed. A Greek default on the bonds held by these banks could have caused serious liquidity issues for German and French Banks. The Germans in particular began to fear that they could be facing a Lehman Brothers kind of issue where the contagion could spread through the Eurozone banking system and thereby collapsing the banking system.

So what they did was this; The Europeans in 2010 clobbered together the European Commission, the European Central Bank and the IMF known as the Troika to deal with the debt crisis. What the Troika did was not to save Greece but to save the Eurozone banking system. They bought the Greek government bonds held by the European banks again mainly German and French Banks. So basically the risks that the banks had on their books was passed on to the Troika. Therefore Greece now mainly owned the Troika and not the banks.

This is the current structure of Greek debt.

So the banks were saved just as happened in the US. The Troika now got to work with surgical precision imposing harsh austerity on Greece and tax cuts ostensibly to free money for debt repayments to the Troika. Bus as we all know austerity does not work. It rather severely contracted the Greek economy with an almost 30 percent drop in GDP and uber-high unemployment.

This led to a backlash by the Greek people and led to the rise to power of Syriza previously a marginal left leaning party the current ruling party. Syriza promised an end to austerity and keeping Greece in the Eurozone. But the Germans in the face of the Troika were not willing to pay ball. So Syriza with their Prime Minister Tsipras raised the ante by calling a referendum of the Greek people if they wanted continued austerity or a sensible debt restricting with a debt write-off. Syriza the ruling party is demanding a 30 percent debt write-off and a grace period of 20 years for Greece to begin paying back its debts. This is quite reasonable.

But the feckless protoplasmic European ruling elite in the face of the EU Commission President Jean Claude Juncker said:

“The question that was put to the Greek people is about something that doesn’t exist.”

It is quite interesting that the so called fountain of democracy and human rights which Europe professes to be does not like the expression of democracy by the Greek people in the referendum. Now at this point we are on the tripping point where a failure to come to a debt negotiation outcome which takes into account the human toll on the Greek people and is reasonable could lead to Greece leaving the Eurozone.

Russia and China are watching intensely on the sidelines. They understand well that Greece is strategic as it is on the southern flank of NATO and the EU and the gateway for Chinese exports to the EU and for Russia’s new Turkish stream gas project into the EU.

What is the lesson for us in Africa? If the powerhouses of the west like Germany, France, Britain and the US can wholly or in part trap their own fellow western and European allies in unsustainable debt so that their export industries can hum, then they will easily do that to Africa which is culturally and racially alien and contemptible to them. We should therefore never take on debt from these western governments or institutions. If we do, we will be signing our own sentence into debt slavery. Will African governments pay heed?

In Memoriam Francis K. A. Allotey. The Death of a Beautiful Mind