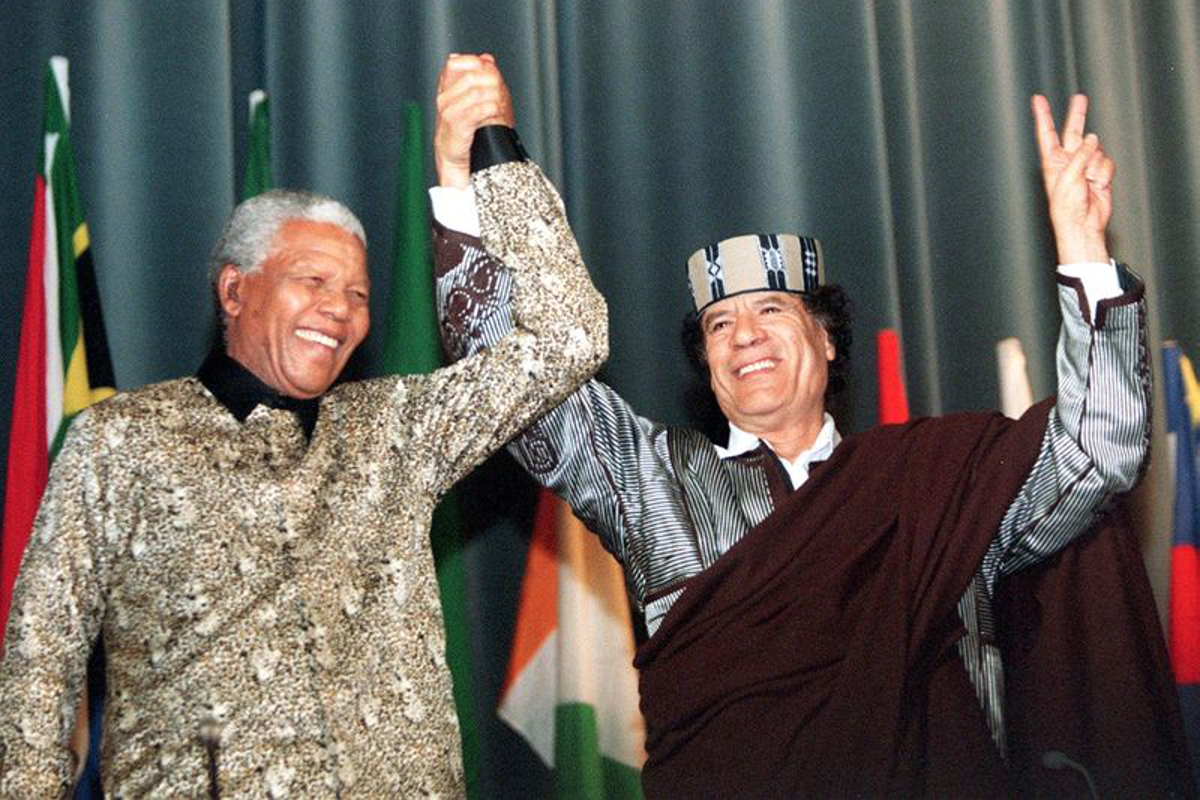 It’s an easy answer to a question the international community refuses to ask, but when the cure was Gaddafi’s dynamic leadership in Libya, when the disease was a revolution actively supported by international air strikes and when the outcome is now a failed state offering a new launch-pad for Islamist extremists, it’s a question which has – at least – to be examined.

Diplomats of our African Union tend to be professional optimists, perhaps from a culture and tradition rooted in hoping even against hope itself. Most believe that a good outcome from almost any crisis is, at least in theory, possible.

They probably have to feel that way to keep going after allowing, or better yet doing absolutely nothing, when a combination of air strikes including British and French aircrafts, poured into Libya, backed by a CIA well-funded so-called revolution or rebel movement by a minority few.

Talking to western diplomats about the collapse they have caused in Libya, however, tests even their hypocritical sangfroid severely.

Whenever, for instance, the British can find some crumb of comfort, some tiny sign of progress amid apparent disaster, they usually speak of “progress in the right direction”.

No-one in the African Union is using that phrase about present-day Libya.

Instead the travel advice issued by the British Foreign Office, leaves no room for doubt.

The Foreign and Commonwealth Office (FCO) advise against all travel to Libya due to the ongoing fighting and greater instability throughout the country. British nationals in Libya are strongly urged to leave immediately by commercial means. The British Embassy in Tripoli has temporarily closed, and is no longer able to provide consular assistance.

The advice was followed by the United Nations Security Council this week announcing sanctions against two Libyan Islamist groups both thought to have links to Al-Qaeda in the Islamic Maghreb.

Britain and her US counterparts who were active in bombing Col Gaddafi dead prostrate and leveling the Libyan desert for good do not quite say that Libya is in total meltdown, but analysts there are more outspoken.

The extraordinary ruling on 11 November by Libya’s Supreme Court that the country’s House of Representatives is unconstitutional is just another sign that the country, once a beacon to our economic community in the African Union, is now galloping towards an inexorable decline.

The ruling that the House and its very existence, plus its very location, were illegal came as a major blow to a makeshift parliament in Tobruk. The court also ruled that its decision could not be appealed, and that all decisions made by the House were to be considered null and void.

The Islamists and Misratans who formed the bulk of Operation Libya Dawn forces, and who were central to the toppling of Col Gaddafi and who back the National Salvation Government in Tripoli as a rival to the House, welcomed the news however.

So what has happened to the free country that was so newly “created” and “liberated” in 2011 from the co-called decades of Col Gaddafi dictatorship?

Well, the breakdown (forecast by many experts) of an ultra-fragile unity of convenience among the rebels has spectacularly come to pass.

In June 2014, Libya held its second national elections since Col Gaddafi’s overthrow, but within months of being elected, the new parliament had been forced to flee the capital, Tripoli, driven out by Islamist and tribal militias in a severely splintered and massively over-armed country.

The House of Representatives, pushed into internal exile, clings on in the city of Tobruk right on Libya’s eastern border, shoved – literally – to the margins.

The Islamists have their own alternative legislature in Tripoli, the General National Council.

Analysts point out that, as well as the disastrous effect on Libyans themselves, and the unconscionable economic woes on many African member states that maintained mutual business opportunities with Libya, this fundamental internal breakdown, or let’s call it what it is, civil war, is proving all but fatal to prospects of vital African investments in Libya.

Who should investors deal with? Is there anywhere in the country that remains safe for them to invest in?

And now Britain’s and France’s supoosed practical efforts at “nation-building” in Libya is in total ruins. Why not leave it alone, Britain and France?

What happened at Bassingbourn Barracks, in Cambridgeshire, is a metaphor for the lawlessness in Libya today – efforts to train a new militia, apart from Col Gaddafi’s long standing army, became a race to teaching responsibility and discipline to men who never wanted to be soldiers in the first place.

And a militia that was intended to be a national army at the service of their government and people completely broke down.

Two of the pro-British militia face trial on charges of rape. In an unrelated case, three others are accused of sexual assault. Britain has sent all the remaining militia home and abandoned the entire training programme.

So is there any hope of a cure for Libya as a whole?

Yes! It is called the African Union.

The US has been forced out of the country. Its embassy is now based in Malta, stripped of most of its influence.

Britain’s diplomats work from the embassy in Tunis.

The UN is trying to mediate between the rival factions, but so far without any success.

That’s not wholly surprising, when you consider that there are estimated to be over 1,700 different groups scattered across the country contesting power.

Intelligence tends to confirm the increasing infiltration of Islamic extremists, the emergence in Libya of groups either actively involved with so-called “Islamic State” or at least sympathetic to the idea of a caliphate conquering as much as possible of North Africa as well as the Middle East.

All of this is to say that Libya was better off under Col Gaddafi. And now that he’s been murdered by pro-British and pro-French forces for absolutely no God-given reason, Libya, a dear member of our African Union is in tatters.

It was precisely the strong will of Col Gaddafi, his dynamism in fostering an ideology of inclusivity and receptivity in a multi-lingual and multi-cultural nation that he imposed some form of supreme rule of law and that maintained the majority of the country in a representative government.

Anybody who interviewed Col Gaddafi came away with a powerful personal impression of a man who deeply cared not just about his people, Libyans, but was instrumental in making our African Union’s work begin after decades of neglect!

His legacy is awesome to behold in hindsight. The Gaddafi cure worked for Libya. But the disease has come to roost – and that is Britain and France, with the support from an unlikely Union itself, the USA.

God Bless you and our African Union, and every place else.