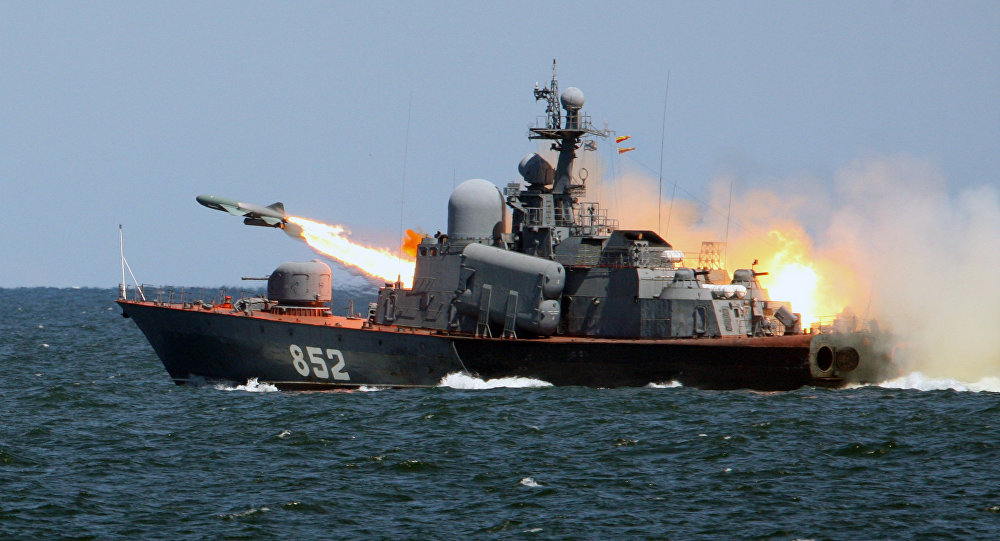 ACCRA — Russia on October 4th, fired 26 cruise missiles from her flotilla on the inland Caspian Sea toward Islamic State targets in Syria as part of a campaign she launched on September 30 in Syria with the invitation of the Syrian government against terrorist groups.

The cruise missiles flew at low altitudes under radar, through the territory of Iran and Iraq and hit their targets with precision. The world woke up to a new reality. The concept of distributed lethality was successfully demonstrated with the cruise missile strikes. This demonstration opens up a vista of geopolitical opportunities for Africa.

The Kalibr NK cruise missiles fired have a range of 1500 to 3500 km. Missiles of such range are usually fired from a class of warships with displacements of at least 9000 tons and a length of about 155 meters. Warships of such class cost about a billion dollars apiece. The Buyan-M class warships in the Caspian Sea that fired the Kalibr NK cruise missiles have a length of about 62 meters and a displacement of 950 tons.

They cost on the average about 120 million dollars apiece while each Kalibr NK cruise missile costs about a million dollars. Therefore, the Russians managed to combine two key concepts, conventional long-range missile capability with deployment on small ships of low tonnage that can easily sail in rivers, large lakes and on the sea.

The concept of distributed lethality applied to a conventional cruise missile capability on small surface ships of the Buyan class type offers the African Union an excellent geopolitical advantage in deploying a relatively cheap conventional long-range missile capability to protect the African Union and prevent disastrous situations like what happened with the destruction of Libya in 2011.

Lack of a powerful conventional deterrent leaves Africa with very limited or non-existent geopolitical leverage, to prevent Libya type situations and to withstand economic and political blackmail from our sworn friends in the North Atlantic.

There are huge river and lake systems in Africa that present excellent geographical opportunities for distributed lethality type systems. We will mention just three, the Niger River system, the Congo River system and the Nile River system that is connected with the great lakes region of eastern Africa.

The development of an interconnected system of canals to link the Niger River, the Congo River and the Nile River will create for the African Union, a strategic interior riverine highway. This will allow the deployment of small river/sea missile ships of the Buyan-M class type, armed with long-range Kalibr NK type cruise missiles, all across the vast interior of the continent and safe from the exploitative prying eyes of the blue water navies of our sworn friends in the North Atlantic.

We will also mention that such an interior riverine highway will facilitate trade and deeper political and economic integration within Africa.

The linking of these three great river systems to create an interior riverine highway is certainly within the technological capability of the African Union. We have a huge pool of raw labor reserves that can do the massive earth works required for such a project.

Lest we forget that the Soviets in the 1930s built such canal systems in the vast expanses of Russia while having less than the technological capabilities available to Africa today. The relatively moderate costs of the Buyan-M class ships and the Kalibr NK cruise missiles creates a wide field of possibility for the African Union in acquiring such assets at the initial stage while the member countries of the African Union pool resources together to put in place the necessary industrial base to build such ships and cruise missiles.

We will like to point out that such missile systems are conventional by definition and do not fall under any non-proliferation treaties. Therefore, the African Union will be operating within the confines of International Law.

The geopolitical triad of an interior riverine highway, small tonnage river/sea class warships and long-range cruise missiles, will provide the African Union a credible conventional deterrent to guarantee the political and economic sovereignty of the African Union.

This will allow us to dictate our own economic terms and choose our own unique development trajectories rooted in our historical and cultural paradigm.

We remember that the Nile river system was the first great cultural highway that brought peoples from the interior of Africa to create Kemet the greatest civilization of antiquity. An interior riverine highway apart from its geopolitical utility will act as a cultural and economic highway to further bind the peoples of the African Union and strengthen the reemerging African civilization.

The establishment of the African Union standby force as recently announced, we believe, is the first important step toward realizing the geopolitical triad described here. We as Africans should work toward its realization. The economic and political security of our African civilization depends on its actualization.