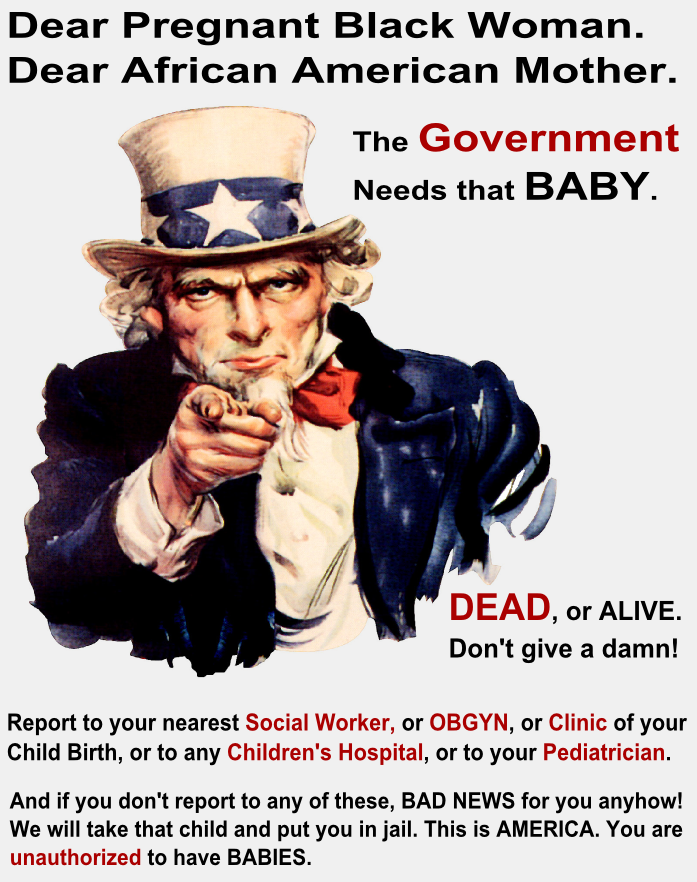 Dear Pregnant Lady. The US Owns Your Body!

The whole thing is totally ridiculous – from the OBGYN offices to the Hospitals, and unto the Pediatrician’s offices. They report women to government agencies (Social Workers) at will, and they can establish whatever tests (including drug tests) or whatever allegations against the woman.

The woman can be incarcerated and her baby, after birth, can be taken from her with such flimsy accusations as “medical negligence”! The whole thing is an institutional federal and state tool to establish a Womb-to-Foster-Care-to-Prison pipeline for predominantly African American families.

The government agencies are in cahoots with care providers so much so that the targeting of poor Black women has become an exercise in a jungle: the hunters are the Social workers, the care providers provide the terrain and the victims are Black families. What constitutes “medical negligence?” Anything! And that is a part of the problem.

Why is government in the business of looking after fetuses when it doesn’t give a rat’s ass about the adults? This is the United States of America! The place from where modern feminist have descended, straight unto African soil, to teach us about their highfalutin civilization.

When we speak and write about American racism, what we mean is an ongoing silent Genocide! No two ways about it! The whole idea of social workers around pregnant women is a sordid reminder that Black women’s bodies in America are under a racialized government surveillance. Of course, it is not only to limit the number of African American births, but it is also there to cull the population itself.