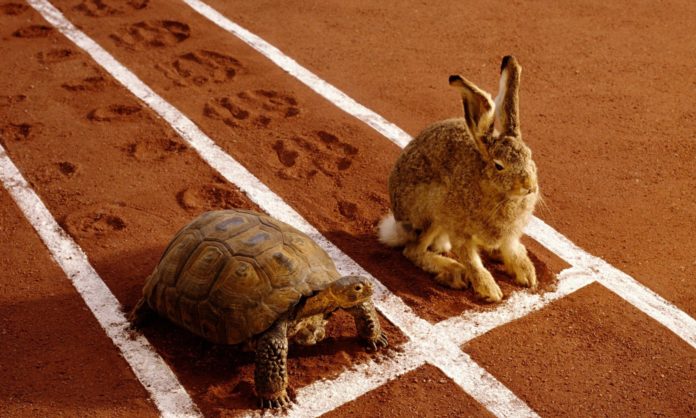 NTOABOMA—There’s a set of old paradoxes that reared their ugly heads during the early days of philosophy. That is, they simply confounded the senses. Nowadays, some solely attribute them to Zeno. Whatever, why not play along? For the sake of simplicity, consider a summary of one such set. Given a distance of 100m to run, one cannot possibly complete the race. Since in order to complete that race, one needs first to cover half the distance (100m/2), then a quarter of the distance (100m/4), and so on ad infinitum (100m/2^Infinity).

That is, one can get closer to reducing the distance to zero, but one can never truly get to zero (in order to complete the race).

But we know that even a tortoise can cover a distance of a hundred meters. Now resolving this paradox isn’t a thing as just simply pointing a finger at a tortoise that is jogging in secret in the forest—making a fool of all mankind. Or to Usain Bolt for that matter. Our mathematics today can show that indeed the wizard in your village can truly fly the distance at night using ideas like “Limits.” Whatever that means.

Yet there are lessons in this paradox that escapes the cursory reader. In fact, in one philosophical attempt to solve the paradox, thought leaders came up with the idea that since a witch can actually fly that distance and more, into a forbidden forest, distance itself, upon several divisions (100/2^Infinity), must come to a point during its division into parts where it is no longer divisible. That is, distance itself must be made up of parts that are in themselves not divisible. Put another way, the distance that a tortoise races over in secret (if in fact these stories are true) contains a finite number (an Agbavitor Constant) of indivisible parts. In which case, a sprinter who is engaged in completing a hundred meter stretch can actually finish the race because at some point during the motion that sprinter is actually performing quantum leaps—leaping over indivisible distances!

Consider that the theory (or explanation) is applied not only to the distance a wizard can fly at night, but to matter itself. Consider that matter is also made up of a finite number (an Avogadro Constant) of particles, not some infinite number of smaller and smaller divisions with no end in sight. These indivisible parts of matter grew into a more formidable theory about “Atoms.”

Now, let’s turn the theory upside down. That is, on its head. Rather than the paradox, or the idea that a wicked wizard (if only there’s such a thing as a benevolent type) has a finite 100m distance to fly to commit adultery unbeknownst to his witch, consider that the wizard has an ever more expansive distance to cover in the universe. The mirror image of the question asked before turns like this in this instance: Will this wizard traverse the entire universe forever without ever coming to an end? Put another way, will this wicked wizard travel the universe, covering such humongous distances that there aren’t any more distances to cover?

Is there a quantum leap in the direction of “getting bigger” where the wizard encounters the biggest distance ever and drops dead? Imagine that this theory (or explanation) can be applied to the concept of “Energy” or “Energies.” Is there such a thing as the largest constant mass or quantum of energy that governs our macrocosm? Welcome to our modern thermodynamics, which states that “The Total Energy of the Universe is Constant!” Is this “quantum” of energy, this [Narmer] constant, now “God,” which is the largest inextensible, inexpansible, mass of energy of the universe—in quite the same way that the idea of the “Atom” represents the smallest indivisible part of matter?

Welcome to Narmer’s Law: The Largest inextensible or inexpansible part of the Energy of the Universe is God. This is where a wicked wizard meets God and drops dead! Like it, or not.