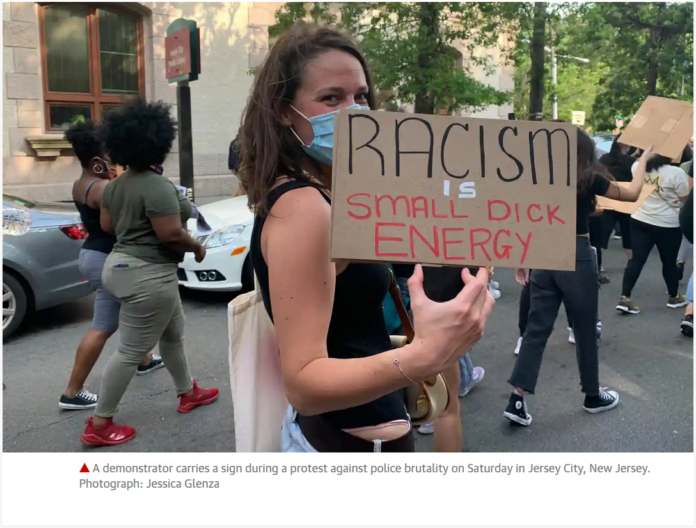 It seems to me that some women of European descent are coming to the realization quite frankly that Cress Welsing, author of the Isis Papers, was actually correct in her musings about the deeper psychological origins of white supremacism within native European cultures.

Welsing’s theory asserts that Anti-Blackness in native European cultures is rooted in nothing else but a disturbing feeling of insecurity with the Black Phallus. Simply put, European societies that nourish and maintain Anti-Blackness with all its violent and primitive manifestations in the enslavement and colonization of Black people, harbor the inferiority complex with their tiny phalluses in stark comparison to the Black Phallus.

In light of George Floyd’s murder, at the hands of the White Peace Officers of America, even some of the women of European descent are carefully trying to understand what it is that animates Anti-Blackness in their native European cultures.

Perhaps, and this placard is testament of that trend, Cress Welsing (March 18, 1935 – January 2, 2016), the African American philosopher and psychiatrist, and author of the1970 essay, The Cress Theory of Color-Confrontation and Racism (White Supremacy), was correct after all.

How apt! How revealing.