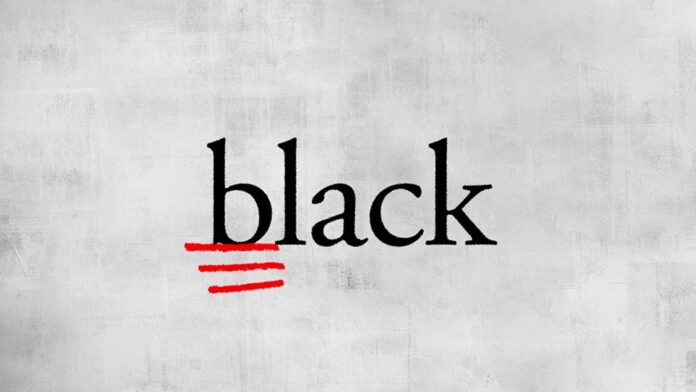 I have been reading with some disquiet about the window-dressing by the American white presses about their U-turn gesture to begin capitalizing the “b” in “Black people.” The stagecraft is as old as the American Reconstruction. When white people tell you that they are trying to get rid of “racism” by capitalizing the “b” in “Black,” what you need to do is remind yourself that this is a sign that nothing else will change.

You need to ask if the “b” is actually what makes the entire writing staff of journalists at the Clinton News Network (CNN), at MSLSD (MSNBC), at the White Fox (Fox News) and at every other major news organization in the United States, almost and nearly, entirely white?

Fixing racism by capitalizing the “b” in “Black?” Who are they foxing? Mind you, most Black people who write have been asking for this to happen for decades, yet the white-owned, white-controlled, white-staffed presses and the entire gamut of the white industrial mass media refused. (Grandmother Africa has consistently maintained using “Black” since its inception). Now, after the reaction to the crucifixion of George Floyd by a white police race soldier, these white presses have found some religion?

Don’t be foxed yet again. Euro-Americans are pulling into view another window-dresser—the likes of which derailed the Reconstruction and the Civil Rights Movement for Blacks. Foxing Black people through the white mass media about fixing race is an old stagecraft of whiteness. Such meaningful, but insignificant acts like: (1) toppling the confederate statues, (2) changing the names of buildings with slave-owners names and now (3) capitalizing the “b” in Black serve to change the topic of change.

What I mean is that the stagecraft serves to do everything else but to topple the violence of racism itself. And so when it comes to racism, the white mass media enlists half-bred Black people to do their bidding: What is “race” anyways? What is “Black” and “White” anyways? And there lies the true nature of the wicked intentions of oppressors.

Don’t be fooled. Don’t be foxed. When they tell you that race is a social construction, what you ought to do is run. Run away far enough from such nonsense else it will infect you with a disease.

Let me make something clear briefly: Racism is a geopolitical construction by Europeans in the pursuit of their unique primitivism—primitive accumulation. To enforce racism (or whatever the violence they needed to amass riches), European scientists were enlisted and funded to build up a biological theory called “race” and the European oligarchs used this to justify their unwarranted, unprovoked, violence against Black people in order to siphon resources from Blacks, and from Black lands, into Europeans hands, and into Europe and America.

Blackness, however, is neither a geopolitical construction nor is it a social construction. Recall that long before Europe’s “racism,” some 5000 and more years ago, there were the Black people of Kemet (the Black Land).

You cannot have a scientific theory that says all peoples (Caucasians, Mongols, etc.) came from Black people from Sub-Saharan Africa, and yet still be adamant about the biological significance of this Blackness! You have to be a double idiot to engage in such cognitive flatulence. If you don’t get it, let me try again: You cannot propose the scientific theory that white people, yellow people, etc., came out of Black people (and not vice-versa), and still maintain that the Blackness of these original Earth people was insignificant.

In other words, if the arrow of humanity points only from Black to the “rest” (and not vice versa), then you have also to admit that there’s something deeply unique and significant about Blackness that the “rest” don’t, and cannot have! And for this reason, one might give the idiots their say when they scream about “race” as a “social construction,” but never Blackness!

I know it is confusing, and perhaps that is why certain useful idiots like Ta-Nehisi Coates and Kwame Anthony Appiah and others like them at the Atlantic (a white supremacist media outfit) bask in their incomplete understanding of what a “theory” entails, and what an observed phenomenon means. But, you know better now!

Do not get into the debate with people of low intelligence—people who cannot tell the difference between a hypothesis and an observed natural phenomenon.  Often times, such people have been enlisted and funded, often without their knowledge and certainly without their full cooperation, to do the devils bidding. Let’s keep our eyes on the ball—ridding our world of the violence of white supremacism. Not to cajole the topic of racism, and absolutely not to engage in white people’s insignificant acts of sympathy.

What I mean is simple: capitalizing the “b” in Black is not a direct reaction to white violence. It is not what we need in order to disband the government and private institutions of white violence against Black people. So, fine, capitalize the “b” if you claim you care, but what is needed in America is no longer the sympathetic gestures of caring, what we need is for white people to become civilized so that they can desist from their barbaric ways. That is the change we demand in America and throughout the world. Period.