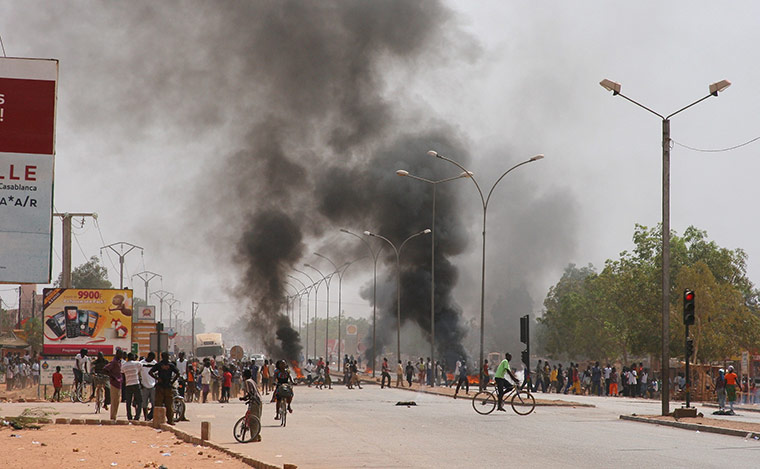 Following days of street clashes, protesters in Burkina Faso have forced the police to withdraw from the parliament building in Ouagadougou. The state television has also been attacked and has stopped broadcasting.

Thousands of protesters stormed Burkina Faso’s parliament building on Thursday ahead of a highly controversial vote.

About 1,500 people managed to break through a security cordon and were ransacking parliament, according to AFP correspondents. Protesters charged through offices, setting fire to documents, stealing computer equipment and burning cars outside. Smoke and fire have also been seen rising from the building.

The immediate cause for clashes is a proposed constitutional change which would allow current President Blaise Compaore to extend his 27-year rule. According to the communications minister Alain Edouard Traore, the bill has been “scrapped” in the wake of the protests.

“We did this because Blaise was trying to stay too long. We are tired of him,” said Seydou Kabre, a protester in the crowd headed to the prime minister’s office. “We want a change. He must go!”

Compaore’s bid to hold on to power

Protesters took the parliament after police started shooting in the air in a bid to disperse them. Security forces previously fired teargas and beat and arrested protesters headed to the parliament building. In response, hundreds of opposition supporters burned tires and set up makeshift barricades.

President Compaore seized power in 1987, and his bid to keep his position has angered much of the public, including many young people, in a country where 60 percent of the population is under 25. The proposed changes would make him eligible for re-election in 2015, when he was due to stand down.

The poor African country of almost 17 million people has been tense for days in the run-up to Thursday’s vote. Hundreds of thousands of people took to the streets of Ouagadougou and other towns across the country on Tuesday in what the opposition said was the start of a campaign of civil disobedience over the proposed constitutional reform. The government initiative has also drawn criticism from former colonial power France, the European Union and the United States.

Protesters also stormed the Burkina Faso state television building, which stopped broadcasting. Some of the protesters are now saying that they they will march on other government buildings in the city.