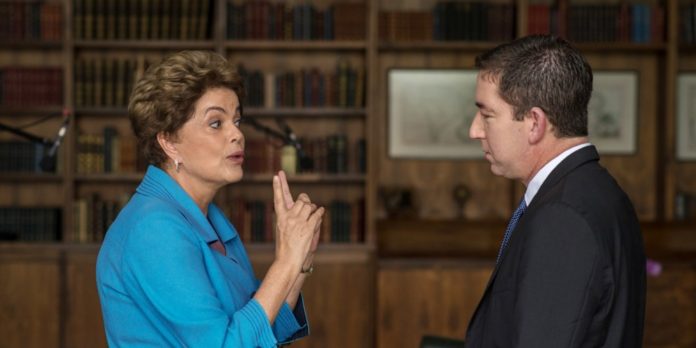 President Dilma Rousseff of Brazil was suspended from the presidency when the Senate voted, 55-22, to try her on impeachment charges, approved by the lower house, involving alleged budgetary maneuvers (“pedaladas”) designed to obscure the size of public debt.

She remains the president and continues to reside in Brasília’s presidential palace, her duties are being carried out by her vice president, Michel Temer — now “interim” President Temer. He has assembled a right-wing, corruption-tainted, all-white-male cabinet (due to Brazil’s coalition politics, Temer is from a different party than Rousseff).

Here’s part of the first interview of Dilma Rouseeff (DR) by Glenn Greenwald (GG) since her impeachment proceedings. You can find the rest here.

GG: Regarding the allegations against you: I know that other presidents, including Fernando Henrique Cardoso, and some governors also performed the budgetary maneuvers that you did, although perhaps not to the same extent as you, but they did use them. I know you insist that the budgetary maneuvers are not high crimes and misdemeanors that deserve an impeachment.

GG: But would you agree that the Fiscal Responsibility Act prohibits them?

DR: No, because it is not prohibited by the Fiscal Responsibility Act. What is considered a budgetary maneuver? The appropriation bill authorizes the process known as complementary credits. And what does it say? It says that if you expect to collect a surplus in taxes from a specific initiative, the surplus can be re-invested. So let me ask you this: Where do these decrees come from? The Superior Electoral Court. The credit I authorized was requested by the Justice Department, by the court.

This is not a surplus from the general pot; it was an extra credit from individual headings, which is something extremely technical. Nothing was concealed. It crossed everyone’s desks. The court has always done that sort of analysis.

GG: You were the first female president of Brazil, and your interim replacement, Michel Temer, revealed his cabinet of 23 ministers last week: not a single woman or Black person and one-third are accused of corruption. How did you react when you saw his team?

DR: Look, I think that … it seems to me that this interim and illegitimate government will be very conservative from every aspect. One of which is the fact that it is a government of white men, without black people, in a country that, in the last census in 2010, and I think this is very important, more than 50 percent of the population self-identified as being of African origin. So, I think that not having any women or black people in the government shows a certain lack of care for the country you are governing.