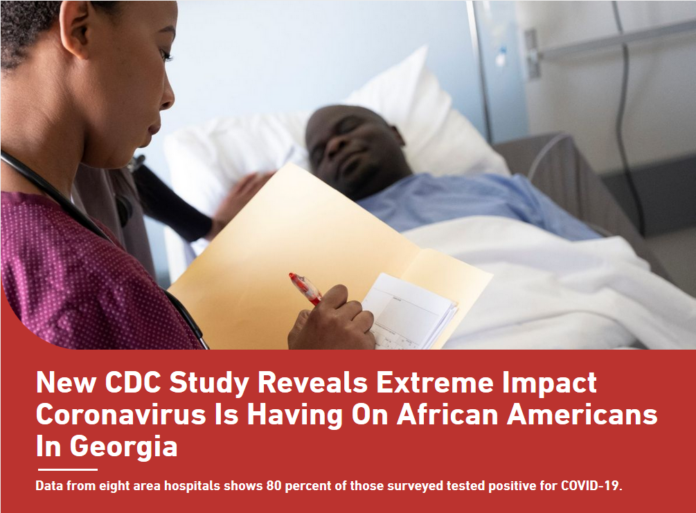 Black People are the Target for Corona Tests? The Warped Research of American Murderers.

While people are furious over the white police department’s cold-killing of the African American man, George Floyd, for absolutely no law enforcement reason, and while a squadron of Americans are busy on the streets protesting the ubiquity of the historical decadence of American Injustice, several American government officials, are cooking up another type of murder. The slow, but sure one. The one that comes unnoticed, baked into the status quo of America’s academia, which is the prevailing new push to assert the unproven idea that Black people are somehow not only more susceptible to the Chinese virus (corona virus), but that any new medical tests for identifying and for treating the disease should be targeted towards African Americans.

Why should you worry when the various state governments of America and their beloved and proven agencies, up to and including their federal jurisdiction, propose solutions (other than issuing checks) to African Americans? You should worry because, historically, American institutions are some of the most sadistic institutions on the planet. They conspire against the self-assertive personhood of Black people. They scheme against the well-being of Blacks.

To understand why nothing the institutions of whiteness in America propose works for Black people, take for instance the following analogous framing of their paralogism.

What I mean to say is that Black people suffer disproportionately from American tax refunds.  However, what you will never here from white American institutions is that the governments in question, responsible for redistributing the taxes that citizens have paid, should target African Americans more for more money. What I mean to say is that you will never hear or read about white institutions proposing the issuing of more, fatter and faster checks to Black people, to properly and equally redistribute taxes paid to their governments. You will never hear a proposal anywhere about targeting African Americans to receive more federal funding for anything!

Instead what you read about is when these white institutions need African Americans as guinea pigs for their ill-conceived research endeavors. How are these white American institutions such penny-pinchers when it comes to finding some ameliorating solution to African American’s financial problems—which mind you, also stem from the same systemic and historical white American violence they speak of—but the same whites transmogrify into ever-ready saviors when it comes to injecting Black people with untested pharmaceuticals and unproven vaccines?

Yes, their answer—to why Black people are bearing the brunt of the pandemic that is the Chinese virus in America—is that the “evidence” shows that Blacks are poorer, and as a result unhealthier than the rest of the population, and that Blacks are more likely to suffer from complications from the virus. Now you could ask, why is the solution not one of eradicating the white violence that ensures that Black poverty? Or you could also just as well request the data. Once you do this, you uncover a scheme—a Tuskegee type of conspiracy to kill Black people.

For instance, the data that these white-murderer-public health officials would like you to believe that point to their narrative of more Black susceptibility to the corona virus is not the one from all across America, but the data from urban centers with the highest majority of the Black poor.

In Georgia for example, The Centers for Disease Control and Prevention (the CDC) released a new report, which “probed data from 300 patients in seven Atlanta-area hospitals and one near Albany, Georgia, which is a COVID-19 hotspot, showing that 80 percent of coronavirus patients in these locations were Black people. However, Blacks only make up only 32 percent of the state’s population.”

Notice the wording of Albany being a “COVID-19 hotspot.” But isn’t it so in Albany, New York? Yet Georgia’s numbers, Altanta’s numbers, on the virus can’t even touch the numbers in the white populated regions of New York if it tried. No one speaks of Albany, NY, or even Manhattan, NY, as a hotspot however. There’s a purpose to this craft.

Also note the sly, but significant stagecraft of a murderer’s statistical dishonesty—one that is geared towards making Black people the face of the virus so that Blacks can be targeted for a medical genocide via untested pharmaceuticals and unproven vaccines. They speak of Albany, Georgia, one of the seven spots from where they collected data about the 300 patients they examined. That is the 300 patients collected were from some of the most populous Black neighborhoods of Atlanta! The ethnic composition of the population of Albany, GA, for instance, is 73 percent Black, and some 22 percent white.

Or so you thought! But, murderers are not like so. They scheme and they fabricate lies to justify their sickly white supremacist intentions against Black people. Notice the sly mention of the total population of Blacks in Georgia (some 32 percent) against the stark contrast of 80 percent of the corona patients from the seven Black districts being Black! There’s a purpose, I say, to this craft. They collect data from seven majority-Black districts and essentially conclude that Black people are the majority of the patients in these districts.

Go figure! The problem with white American institutions is that they cannot be trusted around Black people. Too many of them have engaged in too much of the medical apartheid which has taken place in America since slavery, and throughout the periods of the Tuskegee Experiments, that is it somewhat shockingly sadistic to still find, in the twenty-first century, that these white institutions engage in the same propaganda to justify whatever it is they wish to do to Black people in America.

And so while Black people—joined in by their liberal Killary-loving friends, who can often be counted upon to lay down their phones, for just a second without calling white cops on “threatening African Americans” in Central Park—are on the streets, busy protesting the injustices of the white American violent departments of law enforcement, other white institutions are flying safely under the radar to enact another kind of violence against Black people. The slow type of violence. The Tuskegee type. The one that appears on the skin and on the legs, and on the stomach and lips, some six years, some six months and some six days later, without a cure!

Again, you will never hear or read about white institutions taking any steps to address the fact that Black people receive far less tax refunds than their fellow whites for the same tax brackets. What you are wont to hear from these white American institutions is when they want you to think they are “trying to cure” a “Black disease” so that they can fly in under the safety of the radar and commit violent acts, genocides, the slow Tuskegee type, against Black people.

The stagecraft is exposed. The snare is broken. And we are escaped. We will continue to expose the wanton desire of America’s white institutions to murder Black people with impunity.