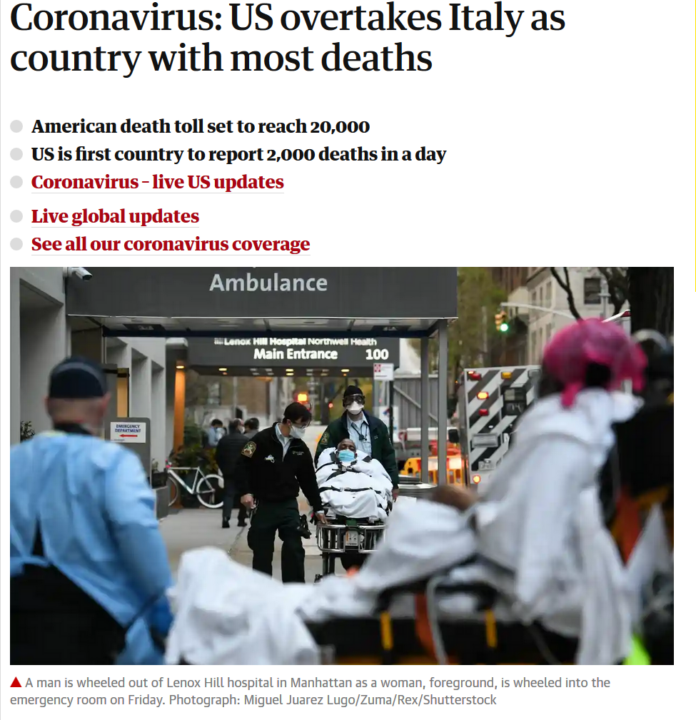 Black Death vs. US Media.

BROOKLYN, NYC, USA — The US Mass Media has latched unto a certain narrative that Black people are dying at a disproportionate rate at a time when the Chinese virus is spreading across the US like Wildfire.

Whether this is founded or not, there’s a little horror associated with the giddiness with which the US Mass Media tells the stories. Some have flipped and hawked all kinds of conspiracy theories about Blacks in America to explain away the disparity.

Take a cursory look at the picture below, this example is but one instance where the people being helped are all Black! In New York City, Manhattan, y’all found a picture of two Black people being wheeled around a hospital to tell what kind of story?

Most people do not understand and could simply care less the level of thought that goes into decisions about pictures and even words, to use in a major article for distribution. Lest are such people aware of ideological narratives.

The picture, symbolism, and narrative about Black people dying in the US at a disproportionate rate than whites, whether true or fabricated, goes to ameliorate the disconcerting exposé, among many whites, during the Wuhan pandemic that whites, and certainly Europeans are actually not as super-human as the white supremacists nuts have concocted, and used to spread their violence.

Is the US Mass Media, joined in by its European counterparts, attempting to counteract the glaring revelation that the West is not more advanced, or more civilized than Africa, a claim they have made for many centuries and used to commit crimes of immense proportions everywhere that European nations have gone? Is western media attempting to counteract the foregoing observation in which the Chinese virus is devastating large parts of Europe in lives and in primitively accumulated wealth, that European nations, and their Europeans, are not better nations than African nations, or better human beings than Africans; that Europeans do not have a patent on “advancement” and that white men do die in large numbers?

What is up the sleeves of western media? Because as it stands, there’s something nervously terrifying about Western Mass Media’s giddiness about Black death during the Corona virus pandemic in the USA.