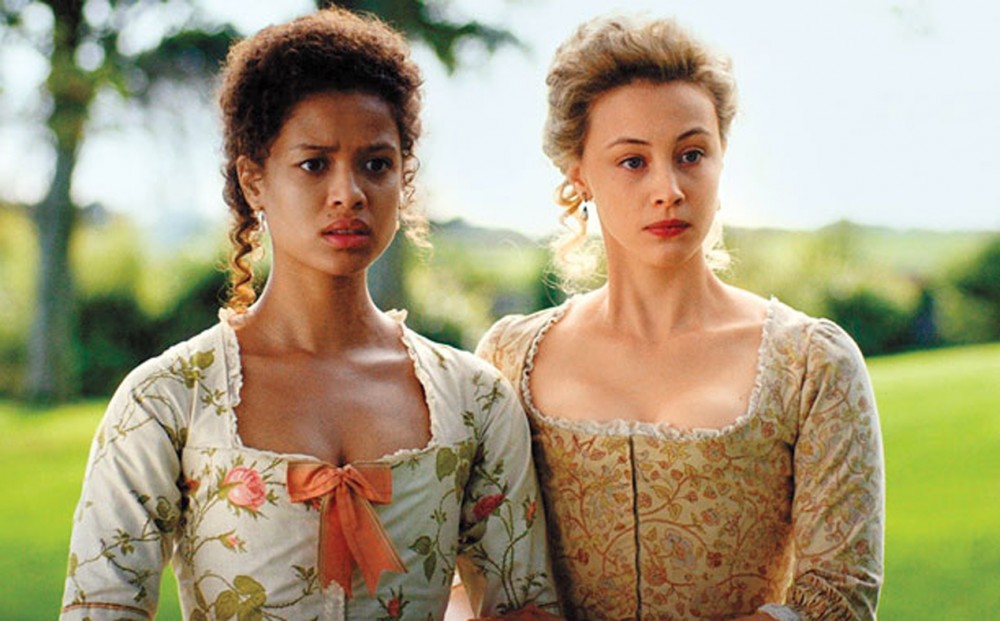 The relationship between people of African descent and people of European descent, when dramatized in western narratives, is normally a strange one. No doubt, there are more humanistic relations when the two groups meet on African soil, but when they encounter one another in contexts where the majority of residents are white, the relations are bent towards a primitive imbalance rooted in ideologies of superiority and inferiority.

That is precisely the milieu in which Belle (Gugu Mbatha-Raw), or Dido as she is familiarly called by those close to her, finds herself. Named after her mother–her full name is Dido Elizabeth Belle Lindsay–Belle is a bi-racial woman of both Black and white origin, which makes her Black by western law and human by African law.

Contextualizing what appears on the surface to be a rather easily understood racial categorization, Belle’s existence in its particular era in history, amidst the 18th century slave trading colonial empire of Britain, puts her in the most peculiar of circumstances.

In 18th century Britain, enslavement of Africans was in full force. Belle is the daughter of a white man, one who happened to leave her a sizable inheritance upon his death. But she is also Black. This combination of characteristics, wealthy and Black, was virtually unprecedented in this social context.

There has not been a place established for someone like Belle in white British society. It is a barbaric society that they currently inhabit, in which the difference between freedom and slavery is solely defined by skin color.

When Belle comes of age, she experiences the brunt of this barbarism, and it jolts her consciousness awake. Her coming of age is one in which she struggles to discover how she is perceived in white British society: through standards set by her color or her bloodline?

The family has a history of accepting and even encouraging Black subservience, meanwhile challenging anything that disrupts those relations. In the halls of their grand residence, paintings depict Blacks in lowly positions, looking up to whites or shielded behind them. Belle’s hesitance to become another figure immortalized in those murals, and especially her apprehension toward being painted beside her white sister Elizabeth, is due to her understanding of how whites, even those who call themselves her family, consistently demean Blacks around them.

Belle is a strong woman with absolutely no dislike for herself; she only resents the manner in which whites respond to her skin color. She often gazes into the mirror, rubbing her palms, her face, her chest, with no intentions of removing her essence or her color for that matter, only her disadvantage she wishes to scrub away in a white British society that is blind to most forms of humanity.

At the heart of the drama is the legal matter of a company attempting to claim insurance money on human cargo–African slaves. The slaves were tossed overboard, murdered, at sea. To the white British owners, they were worth more as dead insured merchandise than alive and diseased, spoiled goods to businessmen whose simple minds register human being as mere products.

The question of whether human life should be insurable as cargo reaches the highest of courts. Belle’s great-uncle Lord Mansfield (Tom Wilkinson) is the Chief Justice who must arrive at a decision that will not only dictate Blacks’ place in white British society but also Belle’s place in her family.

Though half-Black and half-white, Belle is bound to her African ancestry through daily rituals like hair brushing and also through her passion for their freedom and her persistence to have her great-uncle see their humanity.

Amma Asante’s delicate treatment of a topic of such complexity demonstrates the depth of her historical knowledge as well as her ability to convey the pulse of the issue of slavery, both visually and textually, in a compelling narrative.

Those who prefer to identify with white characters would likely rather bow to the “good whites,” including Belle’s love interest John Davinier (Sam Reid) and her great-uncle Lord Mansfield, who throughout the film and by the films end, respectively, condemned slavery. However, Asante and Gugu Mbatha-Raw do well to accentuate Belle’s power.

Ultimately, it is Belle’s desire to upset the racial imbalance, much like the collective efforts from global uprisings of slaves across the Atlantic, that propelled societal change.

When the meek shed cowardice in pursuit of justice, they truly inherit the earth.