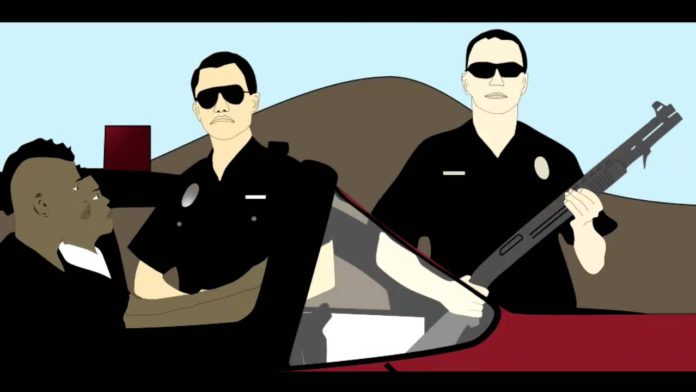 BROOKLYN—Often, when I find myself in white spaces where white people don’t want to see Blacks, some white person always pulls up the police force after you. They call the cops. Or the cops suddenly appear from nowhere.

Sometimes, if you are sleeping, they might hit you hard on the shoulder, with an actual nightstick, jolt you out of your seeming comfort in that white space, perhaps to remind you in your stupor: “This is still a plantation.”

The cops will bellow: “What are you doing here? Your ID…?” If you are “nicely” dressed, that is if you are dressed like other white people, you might get: “Your ID… Sir?” You see, for some of us we know that when a cops asks for an ID this is your only chance to survive. That is when a cop actually asks a Black man for his ID, this is his chance to survive. A chance. A chance to not be punched in the face and shot in the back!

Me, I am originally from Ntoaboma, Ghana. I do not want to return to my village with Amerikkkan cops’ hands all over my dead body. That is a crime, actually, in Ntoaboma.

As a Black man, I take my chances knowing full-well and constantly reminding myself of what happens to many Black men in such encounters. I ask the cops nicely without hesitation, while suffering deep palpitations: “Gentlemen, can I put my hands in my pocket and get you the ID?” (I am not saying every Black man in America should follow this instruction. I am originally from Ntoaboma and I expect to die there in my Ancestral Village. As such, my outlook on cop encounters might be different.)

So, if the cops agree, I say: “Gentlemen, I am putting my hands in my pocket to take out my ID. Please don’t shoot. I am taking out my ID.” I get the ID from the wallet and hand it to them. The fury on the faces of cops trying to throw you out of white spaces usually turns to anger at “Affirmative Action.”

Most whites hate “Affirmative Action.” They think all Black people go to white institutions for free and without qualification. In fact they think “Affirmative Action” is “Freedom Papers for Niggers.” They hate it. (They are not aware that white women and queer white men access Affirmative action more than others.) And that is why they monitor Blacks in white spaces so much. You are not suppose to be free, let alone be there! In fact, in America, you are not suppose to be found outside the borders of your plantation. They call it loitering. It is a crime alright—many Black men have been killed by cops because of it.

What happened to Miss Lolade at Yale University is not uncommon. She went to Yale, that is she ventured “outside her Plantation.” So what the white people and the cops did to her is very common. And it is unfortunate. But let’s face it, Amerikkka is still the plantation it was in 1815, at least in mind, if not also with the fully-armored body. Yes, fully in mind, it is still the plantation that it was. I have not encountered a Black man in America yet who hasn’t survived the white people’s military industrial complex of white justice in America: Cops!

Miss Lolade handled that situation perfectly. I wish I had recorded my encounters as well and comported myself as she did. Next time I will use the Lolade Formula. It is brilliant. No wonder she’s being harassed at the ghetto school called Yale! If Amerikkka wasn’t looting everything from Nigeria, Miss Lolade would be home in Nigeria studying in perfect peace. But alas!