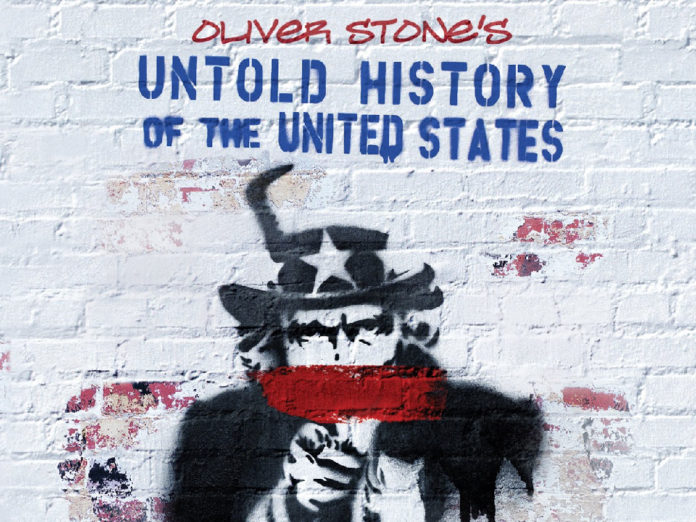 FLIPPIN, MO, U.S.A — Oliver Stone has completed a 10-part documentary series and a 750-page book, The Untold History of the United States, which everyone must see and/or read. It offers Americans and the rest of the world an alternate perspective on US history from the Second World War through the Cold War to the present day.

Stone says he wants to counter the “educational crime” of misleading American schoolchildren. The release of his movie about NSA whistleblower Edward Snowden has been delayed until 2016.

“American exceptionalism has to be driven out of our curricula,” he said. “We’re not under threat. We are the threat. You get the sense that you are safe and have prosperity of material goods, and that you have enemies everywhere – Russia, China, Iran and North Korea.”

“You get into this cocoon where you have a big country, two oceans, but that you’re always under threat. It’s very comforting to be an American. I had only gotten a part of the story, which emphasized American exceptionalism, America as a selfless and beneficial country to the world. ”

In 1967, Stone volunteered to fight in the US Army and served in Vietnam. He was wounded twice and was honored with a Bronze Star for heroism and a Purple Heart for his service.

“I came back from Vietnam puzzled, completely confused about what was going on there. But I did get a heavy dose of the doublespeak, the militarese talk.”

He started asking questions and reading up on “progressive history” at the same time as he studied filmmaking at New York University under Martin Scorsese and other teachers, he said.

These ideas fed his politically orientated filmmaking in the 1980s.

He continued probing that war in Born on the Fourth of July (1989), starring Tom Cruise. JFK (1991) showed his conspiracy theories about the former president’s killing; movies such as Nixon (1995) and W (2008) tackled subsequent commanders-in-chief.

One outstanding commentator, who goes by the name of Michael Vincent buttressed Oliver Stones theme, saying the “U.S. leadership is occupied by The Globalist Criminal Establishment Elite that have specific agendas. The two major issues are the Petrodollar Monopoly and the second is these Anti-Sovereignty Trade Deals like NAFTA and TPP. Those are a major part of the Globalist Criminal Elites Agenda, or as some refer to as the “Establishment”. And that’s why the Establishment (left/right two party Dictatorship & Globalist) invade Sovereign countries and topple regimes and prop up puppet regimes that are in compliance to their globalist agenda.”

“Remember: The two main issues, the U.S. Petrodollar Monopoly and the Anti-Sovereignty Trade Deals. And they topple regimes for various reasons. Examples: To ensure the new propped up regime only allows their resources like their oil to be traded with the U.S. dollar, to build pipelines through the countries, to make sure they are in compliance with the globalist monetary banking cartel system, and for strategic locations to build bases for Global Dominance, etc. In other words, unfortunately the United States of America under both the establishment Republicans and Democrats are Imperialist and our committing war crimes against humanity.

“The Globalist Criminal Establishment Elite consist of Bankers like the Rockefellers and Rothschilds alongside with the politicians that they have in their pockets as well as the Council on Foreign Relations and others. They are the Puppet Masters involved in geopolitical nefarious global domination. They wage and finance direct and proxy-wars globally for their global monetary agenda for power and control. They’re anti-nationalist with no regard to the United States sovereignty. They’re globalist with their own agenda and could care less about the will of the American people or the people of Nations they invade. They are the true enemy of all Humanity. “

Agbedefu-Agbenyo: An Ewe Concept to Improve Work and Life.