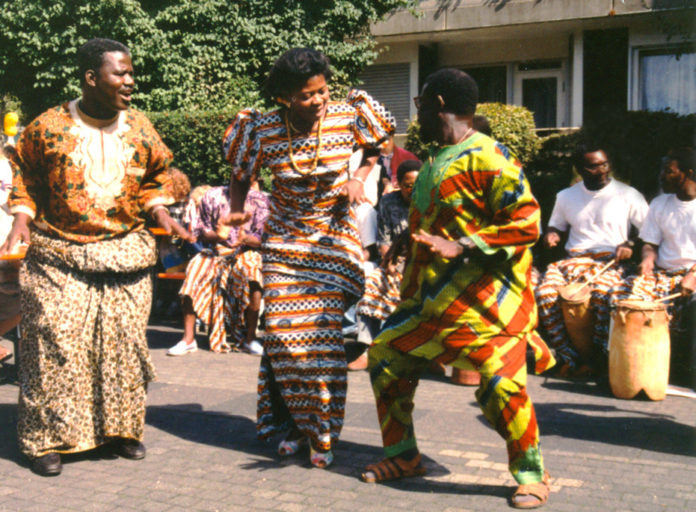 NTOABOMA— At 5 AM, if one drove into Ntoaboma, one would think that a bunch of ghosts have been resurrected to sweep the village compounds and streets. Except they are no ghosts. (I for one have never encountered a ghost who wanted to sweep!). These are no ghosts. These are Ewe men and women, ranging from four to early twenties doing the early morning duties. If you asked Ewes why they are such sticklers to the ritual of work so early in the morning, they would claim it’s about working hard, but I think they undersell the notoriety of their work ethic.

Most Ghanaians with a strong recollection of the television theaters of Ghana Broadcasting Corporation in the second half of the last century would recall an Ewe drama whose main character was Agbedefu, which one could translate as, “Life is tough.” It doesn’t end there.

The Ewes in Ntoaboma have a notorious work culture which ensures that every member of the family has a specified responsibility at home and on the farm. Most Ewes in Ntoaboma have come from long lines of astute farmers and decorated fishermen. But to become a respected farmer or fisherman in the Ewe community does not only take hard work. It takes a notorious obsession for work.

Which makes you wonder how in every month, at least once a month, and on certain occasions, all Ewes in every part of the village still manage to get out, to their respective community grounds for an evening-night full of playing, singing and dancing Agbadza. The Agbadza scenes are a marvel to watch in Ntoaboma. The syncopated rhythm is not the entire mark, but it underscores the part of Ewe life that is often overlooked by others—Enjoyment.

At an Agbadza meeting, it is not uncommon to hear Ewes drink their favorite liquors, eat their preferred Akple and Fetri-Deshi (Akple and Okro soup), dance to their beloved Agbadza, sing their ancient war songs and declare with their chests, “Agbenyo,” which would translate as “Life is Great.”

How do the Ewes, especially those in Ntoaboma square the concept of a notorious work culture (Agbedefu) with the celebration of life (Agbenyo)?

The answer is obvious in the balance of the concepts: Agbedefu, gake Agbenyo. Life is tough, but life is great. You would be totally remiss not to find a four year old Ewe child who could bathe herself and who could wash the family dishes after dinner. It is not uncommon in Ntoaboma to spot little five year old boys stirring the Akple pot at sun down in an Ewe home. The children quickly learn about life, tough life, the responsibilities at home, and tough love.

As they grow older, and as these children take on more and more responsibilities, they also take on significant parts in their respective Agbadza ensembles. In this sense, Agbadza is not a dance per se, it is an embodiment of a vital component of Ewe-life. Agbadza represents the balance to the house work, to the farm work, and to the fishing job that is vital for living. Agbadza provides the Ewe community, and the Ewe person, a balance to work-life.

In other words, the regularity of the Agbadza meetings in Ntoaboma corresponds to the intensity of farm work and fishing. During planting season, there are more Agbadza meetings: more moves are invented, more songs are composed, and children learn to play the highly-syncopated rhythms. Furthermore, Agbadza also entails the teaching and learning of ritual performance.

The art of Agbadza permeates every Ewe home, every Ewe farm and every Ewe boat on the Amu (the Volta Lake). For this reason the centrality of Agbadza in the life of Ewes in Ntoaboma cannot be overemphasized.

For a long time in Ntoaboma, it was well-known that the Ewes had some of the longest-living citizens – 83 years for women and 77 for men. (Of course, this part is hard to prove for lack of adequate data during the period, but the point remains that it was folklore in Ntoaboma that Ewes lived the longest). Could the concept of Agbedefu-Agbenyo contribute to their happiness and longevity?

In an Ntoaboma-Ewe culture where the value of the family and the team supersedes the individual, Ewes are driven by being useful to their families, and to their friends and coworkers, being thanked, and being esteemed by their colleagues. Agbadza helps people to find meaning in their house work; it helps farmers find meaning and closure with farm work and it helps fishermen enjoy their long trips.

Understanding the concept of Agbedefu-Agbenyo, and applying this concept to all aspects of life could be helpful to many people beyond the Ntoaboma Ewe community. If one could appreciate that hard work must be balanced by or rewarded with the performance of art (not consumerism or materialism) one might find more meaning for work, and even arduous work in the office might become even more meaningful. Agbedefu, gake le, Agbenyo! Life is tough, but you know, life is great! And so life itself must be celebrated.