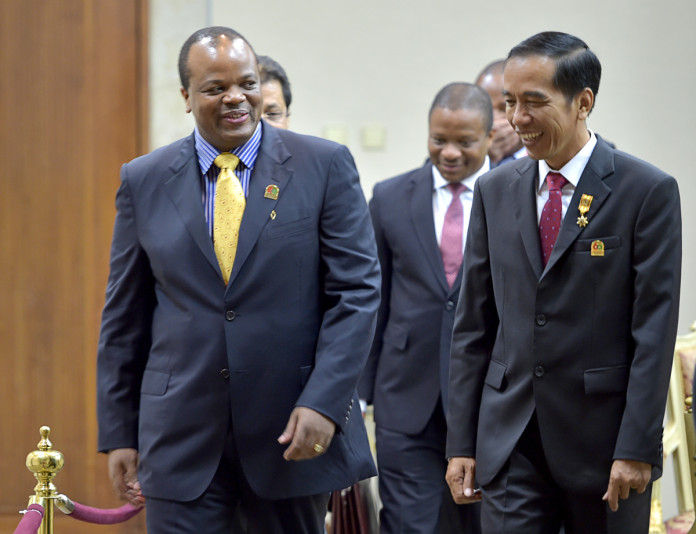 The collapse of the old Kingdom of the first great civilized state in Africa, Kemet, brought a period of chaos which only ended with the unification of the country by rulers from the South of Egypt (Upper Egypt) which ushered in the 11’th and 12’th dynasties of the Middle Kingdom starting in 2160 BCE.

The 12’Th dynasty Pharaoh, Senwosre I, established African power over the Levant (Syria-Palestine) and military, cultural and political influence over Anatolia all the way to the Black Sea region of Crimea in today’s Russia. This was the first African super power with undisputed mastery over west Asia.

In that first historically attested world order covering the geopolitical space of Africa and Eurasia, Africa reigned supreme in culture, science, technology and in military power. Africa’s importance in global geopolitics continued with some breaks into the 7’Th century BCE reaching its apex with the Nubian pharaohs of the 25’th dynasty and finally ending with the collapse of the Egyptian state in 342 BCE when the last pharaoh Nectanebo II fled south to Nubia, south of Kemet towards the heart and origins of Africa.

From 342 BCE, although powerful prosperous states like Nubia, Axum, Ancient Ghana, Mali, and Songhai arose and prospered, they played a minor if any role in the geopolitical world order of the day. This was an Africa preoccupied with internal developments and disinterested in playing a powerful role on the global stage.

It was this preoccupied Africa that collided with the rise of Europe towards a domination of the latest incarnation of the world order starting in the early 1500s. That collision took the form of slavery, followed by colonialism and then imperialism which reduced Africa’s ability to be an independent and powerful player in global geopolitics to zero.

Africa now colonized was used as a resource base and the battering ram of the European powers in World War I and II to maintain the continued geopolitical dominance of the western world. We can see that in the Bretton Woods conference of 1944 to establish the global financial architecture of the post war world.

The fact that the western powers controlled the huge resources of Africa and its subject populations allowed it to dictate the terms of what the new post 1945 world order will be which in part allows the dollar to be the global reserve currency.

The Soviet Union not having the geopolitical depth that the west had due to its control over Africa and its huge resources could not dictate the new rules of the game although it was the military victor of the Second World War having crushed the Nazi German war machine.

The wave of independence in Africa sparked by Ghana’s independence in 1957 seemed to herald a new beginning for Africa with Africa finally waking from its foreign imposed shackles and its preoccupation with its internal issues. Kwame Nkrumah, Ghana’s first post-independence leader, understanding the importance of geopolitics attempted to unify the newly independent states in a federal or confederal structure which would allow Africa to be a powerful independent player in the post-1945 world order dominated by the west and the Soviet Union. Nkrumah understood that a failure to unify politically and economically meant marginality and weakness in global power play.

But this did not happen as Africa became a battle ground between the US led west and the Soviet Union led East during the cold war with Nkrumah himself falling victim to the machinations of the American entity, the CIA, when he was overthrown in 1966.

Other African leaders and the ruling political elite lacked historical depth and a sense of geopolitical thinking thereby subjecting their countries to control from the Russian led east or the American led west. This situation therefore made Africa a geopolitical football to be kicked around on the geopolitical field of the cold war.

The collapse of the Soviet Union in December 1991 seemed to be a geopolitical victory for the west. Its sworn enemy it seemed had been trundled to the graveyard of history. The west seemed to reign supreme, the western model of ‘democracy’ and ‘free’ markets apparently had proved their historical triumph.

Then US president, George Bush Sr., triumphantly proclaimed a New World Order replacing the post-1945 world order. Francis Fukuyama, a former state department official, with academic opulence proclaimed the end of history. It has been almost 25 years since those heady days of the early 90s. The western New World Order is in shambles and in shameful debt ridden retreat into the graveyard of history.

This current New World Order is defined by disaster capitalism, free market justified exploitation of weak and poor countries backed by brutal military force ferociously applied to open up markets to western corporations and to keep countries enslaved to the US dollar.

This current world order in the name of ‘free’ markets does not allow nations in Africa seeking to industrialize to do so. The ‘free’ markets destroys local industries in their infancy and facilitates financial and monetary control over African economies. Any attempt to get away from that can get any African country to be shown the Libya treatment where a sovereign African country, attempting to decouple from the imposed dollar system by selling its resources in a currency of its own choice, was destroyed.

We now have an Emerging World Order. Three cardinal events of the past few months are echoes of this new order. The first echo was the Brazil, Russia, India, China and South Africa (BRICS) and the Shanghai Corporation Organization (SCO) double summit that was held in Ufa the capital of the Muslim republic of Bashkortostan in central Russia from July 6-9, 2015.

The BRICS countries group Brazil, Russia, India, China and South Africa while the SCO groups Russia, China the Central Asian states and now India and Pakistan which just joined the group at the BRICS/SCO summit in Ufa Russia.

The second echo was felt in Brussels at the Euro Group summit of July 13, 2015 where Greece, an indebted EU and NATO member country, was made a German controlled EU financial colony. The third echo was the signing of the Iran nuclear accord in Vienna on July 14, 2015.

Let’s consider the details of the echoes’ and analyze what opportunities it portends for Africa and its place in this emerging world order.

The NDB which starts operations later this year is headquartered in Shanghai. The agreement establishing the NDB which has now been ratified by most of the BRICS countries establishing it has a unique structure. Unlike the western dominated banks like the IMF and the World Bank, which assign votes based on capital share, the NDB assigns one vote per member and no countries hold veto power.

The Bank shall mobilize resources for infrastructure and sustainable development projects in BRICS and other emerging economies and developing countries, complementing the existing efforts of multilateral and regional financial institutions for global growth and development.

This new bank, the NDB, is a big challenge to the dominance of the western backed global financial system. It is interesting that the bank’s birth in Ufa was linked to the dual coupling between the SCO a military-political grouping and the BRICS, a global economic grouping.

The integration of the structures of the SCO and the BRICS heralds a fundamental realignment of forces in the world and a harbinger of the emerging new world order.

The second echo was the financial subjugation of Greece at this year’s July 13 Eurozone summit where Greece, a highly indebted southern European country, was basically offered harsh terms of capitulation which brought its economy and political system under German suzerainty.

The predatory and time tested western method of brutal exploitation of the non-west, in part through financial indebtedness was now being applied to a fellow western country. This is a signature of the crisis of the European Union project and an increasing loss of legitimacy of the western fairy tale known as western economics and finance.

An inability to humanize in a financial and economic sense a fellow European family member leads to a loss of credibility around the world and makes it clear that, if they cannot humanize their fellow family member, then they cannot atone for their 500 year exploitative sin and they are incapable of humanizing Africa.

This releases pent up historical forces in the non-west which then begin to seek an alternative world order where the west is an outsider.

The third echo was the signing of the Iran Nuclear deal in Vienna on July 14. This has placed limitations on the development of enrichment technology by Iran for at least a decade. Although it is understood by thinking people around the world that Iran was and is not seeking nuclear weapons, the agreement will undermine the sanctions regime against Iran allowing Iran to pursue its goals of peaceful development and independence in global affairs.

The Iran nuclear deal should be a demonstration to the African elite that a powerful continent wide military deterrent is crucial to guarantee Africa’s space for unfettered economic and geopolitical independence. This was seen in the Iran issue where Iran’s powerful conventional military power forced the west to come to an accommodation with Iran. The alternative would have been a disastrous war for the west with its economy already in deep systemic crisis. The geopolitical lesson gleaned from this echo should form part of the strategic world view of Africa

The desperate attempts of the US secretary of state John Kerry to convince the Congress of his country to support the Iran nuclear deal and that a failure to support that will lead to a loss of the US dollar as the global reserve currency, indicates that in the foggy minds of the bubble enclosed American ruling elite, there is some small realization of tectonic changes taking place or poised to take place on the global geopolitical arena.

The establishment of the NBD will give Africa in the form of the AU as a block to seek membership in the NDB providing a wide field of possibility in circumventing the genocidal financial ultimatums and conditionalities of the World Bank and the IMF.

The integration of Iran into formal structures of the SCO due to the lifting of the sanctions allows Africa operatizing as the AU to seek a strategic security partnership with the SCO. Such a coupling of the major geopolitical nodes of Eurasia with an AU led Africa has the potential to create an Africa-Eurasia strategic economic space where Africa can maneuver and engage the emerging epicenter of global power Asia to pull itself out of economic dependence on western structures and become a major global player in partnership to the SCO led Eurasia.